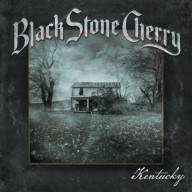 It comes to something when not a month goes by without another “most anticipated album of the year” nomination pops up. People say rock and metal are dead, yet all I see is revival and stubborn continuance in the face of everything that’s always tried to put us down. Kentucky, despite being from one of the most successful mainstream rock bands of recent years, is an example of this. Turning their back on previous label Roadrunner for various reasons but predominantly due to feeling a lack of control over their own sound (see our recent interview with Jon Lawhon), Black Stone Cherry found a new home with Mascot and were given complete reign over production on this album.

There’s been a bit of discussion about the album amongst the Moshville Times team – mainly between myself, David Muir and Gavin Lowrey (who did that interview and accompanying gig review). Our views vary slightly but one point I think we agree on is that, though this is a solid Black Stone Cherry release it doesn’t drive the band forward as much as earlier stuff. There are some great songs here, but nothing that catches the ear and jumps out at you the way that, say, “Rain Wizard”, “Peace Pipe”, “Things My Father Said” or “Blind Man” did.

Having said that, I’ve still had the album on uninterrupted constant rotation for the last couple of days since I got it. As I’ve discovered over many years of reviewing albums, there are releases which hit you instantly and those that sit there and grow like a coat of comforting moss – and that when you look at the review a few months down the line you realise deserved far more credit than you gave them at the time. Even two days in, I feel Kentucky could have been at risk of this.

Gavin’s initial statement to me was that “it doesn’t get going until track six – ‘”War'”, and my first listen would almost have agreed with his. However, my first listen was in the car, driving busy roads with a my daughter nattering over the top of proceedings! Sat over the last day or so by myself with it playing over headphones I’m appreciating it a lot more. And while I’m not getting too many moment where I’m stopping work just to focus on the music as I was with older albums, I’m still enjoying it immensely.

In fact, as I was typing this review up I got a message from Gavin simply saying “I’ll take that back, it’s a slow burner”. As I re-listen to the album again typing this article up, I can tell you that this is something we definitely agree on.

Musically, Black Stone Cherry are up there with the best. Great musicians with a knack for writing songs that don’t just sound good, but which make you feel something. The imagery in Chris Robertson’s lyrics are as enrapturing as ever – the “Medusa” referred to in “Shakin’ My Cage” can be perfectly pictured in your mind’s eye as the character is fleshed out throughout the song. The track itself is a fairly heavy number, pounding rhythms and distorted guitars making this a track to nod your head to… and yet it still has that edge of groove that has my picturing Salma Hayek dancing seductively in the background of the Titty Twister while I’m supping a beer and checking my stakes are sharpened.

For me, though, the album “gets going” with track four. The brash brass sounds in “Soul Machine” make this a belter of a song. Bouncy, catchy… this is verging on being some kind of party track. If this doesn’t go down a storm live then there’s something wrong with the world. This is what you play to finish off a two-hour live set… and the audience. Bring out the backing singers and a few additional musicians to go along with it, pop off some paper streamers at the climax and you’re walking off stage very much leaving thousands of people wanting more. Want to check it out? The new lyric video is down the bottom.

“Long Ride” is the first of the gentle tracks on the album and is a solid power ballad. Chris’ throaty vocals suit it perfectly and the strident guitars in the bridges hold things together wonderfully. To go back to the live scenario, this is your “arms waving slowly from side to side while hugging the significant other” song. Cracking guitar solo towards the end, too.

Gavin’s not wrong in saying that “War” gets things going, though. Quite the mish-mash of sounds and a very ambitious arrangement, this multi-layered take on Edwin Starr’s original is a bombastic success. Without losing the 1969 version’s funky hook, Black Stone Cherry pile on the rock. It’s certainly the loudest track of the baker’s dozen on Kentucky!

Another song I particularly like is the up-tempo tale of lost “love” (well, OK, drunken one-night stands), “Cheaper to Drink Alone”. A great little sordid story wrapped in some catchy music. “Rescue Me” which follows it is a little confused, though. It has some wonderfully heartfelt lyrics but I feel they’d have suited a song that’s just a little less galloping. The refrain is the best part of the song, but it loses its impact as it slips into quite a heavy chorus.

We’re back on track with “Darkest Secret”. A chorus that’s easy to learn and great to sing along to, and bags of atmosphere. Again, Black Stone Cherry have produced a song that doesn’t just tell a story but puts you right in the middle of it. Where they tell you to “close your eyes” you could literally do this and picture the scene around you. Once more I’m noticing a darker, heavier tone to BSC’s music in this album and “Darkest Secret” is one of the more notable examples (2:40 – 3:00 in particular).

“Born to Die” is gentler territory with a soaring chorus, but it’s the final track “The Rambler” where the album’s title finally gets a name-check. Written by Shinedown’s original guitarist Jasin Todd and adapted by BSC to more fit their own sound, it’s an acoustic tear-jerker made all the better by the addition of additional strings in the background. With the heavier sound predominating the rest of the album it does sound a little out of place and placing it last makes sense. It’s so different from the other songs that putting it here makes it more like a “bonus” track, and separates it from the other music. It’s a lovely, counterpointed way to round off the album.

Kentucky is a very strong album, but the point that David made does still ring true. There’s a lot here to appease any Black Stone Cherry fan. Folks, you won’t be disappointed. No way on earth. But is there the earworm here that will catch hold of first time listeners and make them think “I have to buy this album”? I’m not so sure. I can see people still picking up Between The Devil… because of “White Trash Millionaire” or “Blame it on the Boom Boom” and later on moving on to Kentucky and loving it, but it’s not a great “jumping on board” record.

Still, that just makes it all the more special for those of us who’ve loved the band for the last few years until everyone else catches up!