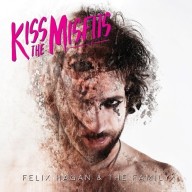 At its very core, Felix Hagan & the Family present a tight, solid EP with Kiss the Misfits. It’s radio-friendly pop-punk. So pop-punk with extra pop. But it’s so much more than that. There’s a grandiose nature to it. Endorsed by Frank Turner, he said:

Within about 30 seconds of them taking the stage, I was sold, a total convert, a newly-signed-up member of the cult.

And I can whole-heartedly agree. Maybe not on seeing them but definitely listening to the EP.

Stuff like this isn’t normally my taste. When I used to have Kerrang Radio on in my old job, it would fall into the category of “not the worst thing they could play” but I wouldn’t wilfully listen to it. However, Kiss the Misfits changes that and challenges my tastes, allowing me to embrace it. It’s fun and light-hearted music that will lift your spirits as pop-punk should be. Yet its lyrics hit a deeper level. Songs like “Some Kind of Hero” is about depression and those people who help you through the dark times. Meanwhile title track “Kiss the Misfits” is an empowering track focused on accepting yourself and others for who they are.

The afore-mentioned “Some Kind of Hero” is full-on pop as if dragged by the T.A.R.D.I.S from the 80s into the present day. Heavy on keyboards from Joe Davison and bass guitar from Chris Hunsley and a massive chorus, you could likely get away with playing this at a throwback club night. Except you can’t for wibbly-wobbly-timey-wimey reasons.

“Get Well City” falls in line with the rest of the head, a massive singalong chorus from Hagan with some incredible harmonies provided by Ellie Cowan and Tash Hodgson. It’s a light-hearted, tongue in cheek look at facing sobriety…by drinking your way there. That last drink is always the best one.

Felix Hagan’s own voice is relatively versatile, hitting high notes and guttural equal lows. Lead guitar comes from Tom Webber and it’s punk licks at its finest; a glossy, friendly pop welcome but equally snarling and sneering punk. Given there’s so much going on in the EP yet kept intentionally straight-forward, Stuart Mann’s drumming doesn’t dominate the tracks but you can easily pick it out, driving songs forward and working well in tandem with Davison’s keyboard work.

Felix Hagan & the Family are a fun, welcome break from the norm and I want more. They want to give you more so if you buy Kiss the Misfits, you’ll be helping to fund an album which I can subsequently recommend.