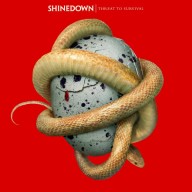 I’ve left this one a little close to the wire as Threat to Survival is out in two days (September 18th). In fairness, it means I’ve been able to give it a fair listen rather than tap something out based on first impressions which I’m often forced to do.

Shinedown are a great band. I love the sound, I think they’re superb live performers and they’ve written some of the best anthemic heavy rock tracks of the last ten years. However, Threat to Survival has one serious issue… it follows in the wake of Amaryllis, one of my favourite albums of the last few years. Hard to believe that it’s been over three years since that album came out, but here we are with the follow-up.

Credit to the band, they’ve created something with a very different sound and with a couple of tracks which really do step outside their usual boundaries. With Threat to Survival they seem to have perfected the skill of writing songs which are emotive, catchy and yet surprisingly heavy. The latter is mainly due to Barry Kerch’s stomping drums which pretty much beg you to headbang to tracks which are otherwise very radio-friendly.

Seriously, take “Outcast” for instance. It’s not one of my favourite tracks on the album but it’s incredibly heavy in the backline while having a near-pop line in effects-laden guitar and keys over the front. Cheaper speakers and headphones will suffer from this one!

No Shinedown album is complete without a slow-building power ballad and the candidates on this album are “Dangerous”, “How Did You Love?” and “Misfits” which aren’t bad efforts. They’re just not up there with older tracks, but they face stiff competition. Will they ever better “Second Chance” or “I’ll Follow You”? I doubt it. “Dangerous” of the three comes closest, being the best of the three.

“It All Adds Up” is a strange little number, in particular the opening minute or so. It took me ages to recall the track it reminded me of – “The Clapping Song” of which there are many versions (check out this one by The Rebelles). Soon enough, it sidesteps back into the Shinedown safe zone of heavy beat, but the overall rhythm just keeps dragging me back to that old-time classic.

Picks of the album are opener “Asking For It” – a great, driving start; “Dangerous” and “Thick as Thieves”. And throw in the first single “Cut The Cord” as well. It’s by far the heaviest track on here.

This isn’t Shinedown’s best album, but that’s damning with faint praise. Most other bands would kill to release something this strong. Shinedown’s only crime is having done better in the past.

A bad bad bad album. So disappointed, seriously could not be more disappointed. Reviewer was not as harsh as he should have been, I love modern rock – there are a lot of people doing better than this right now. Disturbed’s new album is worth a purchase, Willing to give a new band a try? Bridge To Grace or someone like that. And before this people carrying the light Veer Union etc. This release is seriously bad. I am so disappointed. I genuinely am unable to play any musical instrument but fully believe given the chance I could easily produce… Read more »

Hey Jason. I could have been more harsh with my review, but I didn’t think the album deserved it. I have listened to the whole thing right through quite a few times now (15-20) so the review was based on giving it quite a bit of time to soak in. Overall, as I said, it isn’t as good as previous efforts and doesn’t have any tracks which stand out as well as many of the bands’ previous classics. I’d draw the line at saying it’s badly played or produced, though. For someone who doesn’t know the band, I think it… Read more »

wpDiscuz
2
0
Would love your thoughts, please comment.x
()
x
| Reply
The EU says I have to tell you we use cookies. So. like every site on the entire internet Read more.