This is a bit of a different album for Joe as it’s a concept album based upon one of his alter ego’s representing his more extrovert stage persona which he calls Shockwave Supernova. The songs on the record tell the story of Shockwave’s memories of previous performances and his aspirations. Even though Joe’s previous album Unstoppable Momentum came out in 2013 some of the new songs on this album are years old, indeed some date back as far as 1988, and some were nearly on the last album but Joe felt they weren’t yet quite finished. Being that the album is completely instrumental it’s quite difficult for a listener to follow any kind of storyline on the album, perhaps a track-by-track explanation from Joe would make it clearer, but meanwhile I’d suggest that the listener just enjoy the album for what it is. 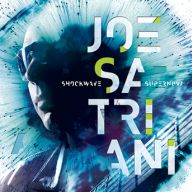 I pretty much knew I’d enjoy this latest offering before I even put it on. You know what to expect from a Satriani album: world class musicianship, great melodies, and well thought out song-writing and that’s what’s on offer here. His playing is an inspiration to the rest of us guitarists who struggle to play his songs and stand open-mouthed in awe at his talent. For me he stands up there with the best guitarists of our time.

The album kicks off with the title track “Shockwave Supernova”. It’s quite a laid back mid-paced song where the emphasis is more on groove and strong melodies than flash guitar playing for the sake of it. This is one of the reasons I love his material so much and probably why he’s accessible to guitar and non-guitar players alike. Flash guitar widdling gymnastics may impress other guitarists but when it comes down to it it’s not really musical and my favourite instrumental rock guitarists all place an emphasis on melody and good song writing.

While the album is immediately recognisable as being Satriani, for example “Lost in a Memory” has some very typical legato type sequences, we also see Joe branching out into new musical areas and there’s quite a few surprises to be had on here. “Crazy Joey” begins with an unusual reggae type feel which is something I haven’t heard before. “In my Pocket” brings back memories of “Big Bad Moon”, in it’s feel and with the harmonica playing, but it also has an almost electronic sound to the drums at the beginning; it’s probably one of the highlights of the album for me and has a groove that you can’t help nodding your head along too. Something which I also noticed, and was impressed by, is that the percussive elements have really been brought to the forefront on many of the songs; a song which wouldn’t sound out of place on a movie soundtrack, “Cataclysmic”, has some very nice almost sleigh bell type sounds on there. “San Francisco Blues” I found to be quite a jarring change of pace after “Cataclysmic” and has a bit of a 50’s rock n roll surf feel. It’s tempting to go through every track on the album as there is such a wide variety of styles on here but instead I’d recommend that you listen to it yourself and make up your own mind.

While many will argue that Joe Satriani’s best work was around the Surfing with the Alien period I would have to disagree. For me his last few albums have been stunning, his work is always progressing and changing. If you’re looking for Surfing with the Alien part 2 then this possibly isn’t for you as it’s more in the vein of Unstoppable Momentum, but as for every other Satriani fan you really need to rush out and get this. You won’t be disappointed. If you’re new to Satch then this album is as good a place as any to start. Another great album from one of the biggest-selling instrumental rock guitarist of all time. Highly recommended.

View all posts by Martin