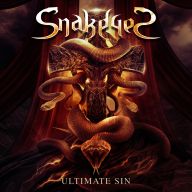 I’ve featured SnakeyeS a few times before since they cropped up as a Band of the Day at the end of 2013. At that point they had a few tracks released as an EP but showed a lot of promise. Their first full-length EP has landed, and I can tell you that Ultimate Sin does not disappoint. At all. Not one bit.

Ultimate Sin is a heavy metal album. Straight down the middle, no frills, pounding, crushing metal. It takes zero effort to get into and you’ll be banging your head to it after a single listen. Yes, I get that reviews often throw hyperbole around the way politicians throw promises but I promise this is true.

Opener “Demon in Your Mind” is akin to Judas Priest – fast, furious and catchy. “Denied” adds a sleazy, Alice Cooper tone to things, but it still heavier than the material that the famous golfer releases. “Shadow Warriors”‘ opening riffage brings Annihilator to mind, which is no bad thing, but once the vocals arrive it’s more like some kind of clash between Waters and Bruce Dickinson.

You see, what SnakeyeS are good at is writing tracks which remind you of other bands, yet are completely original. The fact that they’re reminiscent of classic artists means that even on that first listen the material has a familiarity that lets it hook into your brain.

I’m not going to dissect each and every track because the only way to really get the point through is to listen to it. I’d say the biggest influence – it comes across in the lyrical style – is Rob Halford, but overall Ultimate Sin is just a damn, damn fine metal album. Do note, though, that the three original EP tracks (not the Priest medley) are included within Ultimate Sin. I’m not sure if they’re re-recordings, but I doubt it. The original production was good enough that they’d not need re-working!

Enjoy the video for the title track below and check the band out via the links provided.