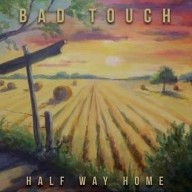 Since Bad Touch made their Glasgow debut, opening for the Quireboys eighteen months ago, I’ve had the joy of seeing them open for a few of my favourite bands and I was lucky enough to see them at Download last year. Suffice it to say, they’re pretty damn good.

Naturally, I was overjoyed to hear they finally had their debut album recorded and would be available at shows supporting the Answer (I was already going to this tour). I could finally listen to their blues-laden rock any time I felt necessary. By the week of the upcoming gig, I was more eager to get my hands on the album and their set than the Answer’s.

You know when you’re waiting for something and it doesn’t live up to the hype you or others put on it? This doesn’t happen. Instead, Half Way Home is eleven glorious tracks from one of the best up and coming bands I’ve had the pleasure of seeing.

Opening track “Wise Water” is indicative of the band’s sound; bluesy licks but possessing a hard, crunching edge from lead guitarist Rob Glendinning, a catchy chorus and a great hook. And like any good lyrics, you can find your own interpretation if you read between the lines.

Elsewhere, we have “Sweet Little Secret”, containing the riff Jimmy Page never got around to writing for a Led Zeppelin album but there’s a hint of something more modern, something a bit leftfield lurking underneath to retain it’s own identity. The dual guitars of the afore-mentioned Glendinning and Seeks weave around each other; grinding, screeching and wailing.

Meanwhile, George Drewry on drums and bass guitarist Bailey create some solid rhythms with songs like “Motherload” which sit up front and centre with the rest of the band, refusing to lurk in the background, and it’s here where the band works best. Everything in the mix is on an even keel as the band’s rhythm section knows when to go full speed, hang back or find a delicate balance. Regardless of the song, they manage to capture your attention and damned if you can break away from it.

However, it’s the bluesy numbers like title track “Half Way Home” and “No Excuse” where the band truly shines. It’s Bad Touch at their finest. Stevie Westwood’s rich, soulful voice burns throughout the songs with a wistful quality on the latter track.

There is room for Bad Touch to plant their tongues firmly in their cheek with “Good on Me (Jeans Song)”. Featuring a big riff and rhythm which forces you to nod along with, the band covers the issue of wearing women’s trousers. The minute I hear the opening riff, I can’t help but grin. The chorus is ridiculously infectious and you’ll have “Tell me where you buy your jeans” swimming around your head for hours.

There’s an underlying sense of meticulousness with the track order and pacing and I don’t mean that to disparage. Too often albums fall into the trappings of putting all the heavy-hitters at the front, chuck in a few ballads then close with another hard rocking song to end on a high. Instead, Bad Touch delicately balance the bluesy ballads with the edgier tracks to make an album of peaks and valleys and by the time the last song finishes, when you expect more to come, it’s over too soon.

Half Way Home is definitely worth the wait. The boys are back in Scotland for this year’s Wildfire Festival (Les-Fest’s new moniker) which sadly I’ll be missing as AC/DC will be at Hampden. And with a fantastic line-up, it says something of Bad Touch’s quality that they’re one of the best bands appearing over that weekend. If you listen to Gene Simmons declaring rock is dead, all you need is a band like Bad Touch to refute that.

Half Way Home is due for release 27th April.

[…] you have as good a debut album as Bad Touch did in Half Way Home, the concept of the “difficult second album” is an ever-looming presence. Striking while the […]