Cards on the table, I checked my iTunes app and I have 4.6 days worth of Christmas songs. I admit, that there is a fair amount of schmaltz and cheese in there but there is also plenty to keep rock and blues fans happy. I don’t consider 4.6 days worth enough, so I was pleased when the following four items passed through the Moshville Times inbox.

This is an original song that was described to me as “gothicy-metal”. Not my usual choice of genre but… it’s Christmas, so I thought I’d give it a go. And, I have to say, it lived up to everything that gothicy-metal conjured up in my mind. Tor Marrock and his band (also called Tor Marrock – presumably to save confusion) deliver a brooding, atmospheric track. A distinct lack of Christmas bells (or Christmas tree smells for that matter) but the lyrics start: “It’s Christmas.”, closely followed by, “It’s December.” just in case there is any doubt that we are in Christmas song territory. The stripped back drum and bass heavy opening with the overwrought vocals weren’t convincing me that this was a song that would find it’s way into my Christmas playlist… until around the 50 second mark, where Coco Star makes her presence felt. Apparently Coco is well known in the dance music scene and first met Tor while recording in his studio. Despite coming from different musical world they hit it off and this Christmas song grew from the friendship they formed. She has a fine set of pipes and I must admit, I would have liked this track better if she had been allowed to cut loose but she was kept in check and the dark, brooding mood of the track was left undisturbed. Check out the official video below.

2. Corvus – “Can You Hear The Sleigh Bells Ringing?”

Corvus is made up of four experienced session musicians who shared a love of classic rock. With, “Can you Hear The Sleigh Bells Ringing?”, they have created a Christmas song that is about as far removed from the Tor Marrock track as you can get. Full of pop rock vigour; jolliness pours out of every note. It is a little too lightweight for my taste but it is not without merit. Check out the video and make up your own mind. 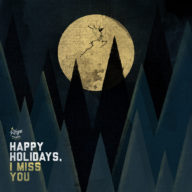 If the first song was too dark and the second to light, by the Goldilocks principle, this one should be just right. There is, in fact, a whole album of diverse styles to choose from and more than a few hit the mark. “Happy Holidays” is a compilation of Christmas themed tracks from artists on the InVogue record label. According to their website, “The label offers a diverse selection of alternative rock, punk, spoken word, and hardcore artists.” – something for everyone. My two favourites are a Fall Out Boy cover of “Yule Shoot Your Eye Out” by In Her Own Words and “Memories In The Attic” by Convictions. The entire album is on Bandcamp and can get it for free, although you are invited to make a donation to The Jason Christopher Wilhelm Scholarship Fund if you decide to download. Be warned: the subtitle of this works is, “I Miss You” which indicates the collection tends towards the melancholic rather than the merry.

I’ve kept the best for last! “Mistress For Christmas”, is an AC/DC song that shows the boys at their most macho with lyrics such as, “I like female form, in minimum dress” and, “I can hear you coming down my smoke stack“. I was curious therefore to see what Lzzy would do with it. Would she adjust the lyrics? The answer is, “Yes”. She makes them even filthier! The “smoke stack” line becomes: “Slide down that North pole, baby!” – ooer, missus! I think we know what you are saying Lzzy. The band batters through the song with passion and power and the track sounds heavier and even more in your face than the original. Lzzy nails the vocals and delivers a couple of blistering solos. Brilliant! Halestorm seem to be having a ball (a Big Ball?) with this track. I love this cover. Interestingly, Wikipedia quotes Angus (and who am I to doubt Wikipedia?) as saying that they wrote it about Donald Trump which makes it even more interesting as a choice for a Christmas 2016 release. I am going to be playing this many times on the run up to Christmas.

David discovered rock music as a young, skinny, hairy teenager. He is still listening to it umpteen years later even though he is now old fat and baldy. The first album he bought was by The Wombles but try not to hold that against him. View all posts by David