Steelhouse Festival are delighted to announce a trio of additions to the line-up, including the mighty Thunder who will be performing a fully electric UK festival exclusive set on the Saturday. Also announced are neo-blues trio, Wille & The Bandits and fast rising Cambridgeshire hard rock quartet, Hollowstar. 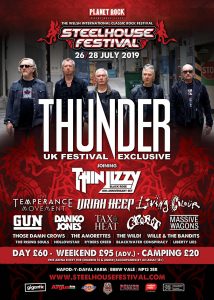 We’re a classic rock festival, it doesn’t get much more classic than a full tilt electric show by one of the UK’s greatest components of genre. Thunder tick all the boxes, but essentially, in the live arena, they deliver in spades…Nobody does it better. Not only is their Steelhouse appearance a 2019 UK festival exclusive, the chaps have also agreed to make this a ‘By Request’ show – they’ll look at your song suggestions and work some into what will be, a very special Saturday night headlining set…Yes, the forecast is stormy!

We’re very pleased that you’ve remained seated during our recent tour, but this summer we’re playing Steelhouse Festival where we want you to jump up and down in your best jumping trousers on Saturday the 27th of July.

Max and Mikey on Wille and Hollowstar:

Wille and the Bandits are a formidable live act, there’s some real momentum there and with props from the likes of Joe Bonamassa, Ian Paice and Francis Rossi, their reputation precedes them. Add to this wholly positive support from radio to broadsheet, their Steelhouse performance is not to be missed.

When it comes to the earlier slots on the Steelhouse bill, we like to give them to bands we’re truly excited about, the ones we think have what it takes to go somewhere – Hollowstar are such a band.

With these three acts joining the host of already announced bands, including Thin Lizzy, Living Colour, Uriah Heep, Temperance Movement, Gun and many more, Steelhouse Festival is looking better than ever!