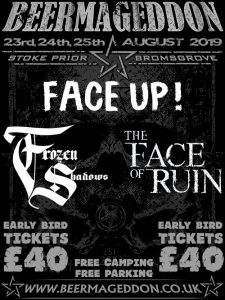 Every year Beermageddon Survivors vote for the band they want to return to the festival as their Friday night headliners, after a storming high octane set they welcome back once again… Face Up!

An amazing set from their recently released debut album The World Is Ours cemented them as firm fans favourites, and they will once again bring the punk to the party in 2019 with a full festival headline set.

A band who made a huge impression at this year’s festival and came second in the Beermageddon Survivors Poll will also make a return to the event in 2019, their fun, fast paced set won us all over so we welcome back The Face of Ruin.

Once again it will be time to hold those jazz hands high for their catchy and heavy blend of melodeath riffs with breakdowns and black metal. We cannot wait for the return of The Face Of Ruin, and the band cannot wait to be back to play for you once again at Beermageddon 2019!!!

Over the years Beermageddon has garnered a reputation for bringing the best upcoming bands the UK has to offer and 2019 is no different as we welcome Manchester’s newest melodeath band, Frozen in Shadows!

The band have just released their debut EP and it is an absolute scorcher, the second we heard it we knew we had to bring them to Beermageddon. By the time August Bank Holiday rolls round we have no doubt Frozen In Shadows will be the band everybody wants to see and the place to see them is Beermageddon!!!

Once again one lucky winner will win tickets for the next festival and as usual there will be fun and drinking games through the Friday night festivities. From PacMan to Silent Hill, Lara Croft to Spyro, the video games will come to life at Beermageddon 2019!