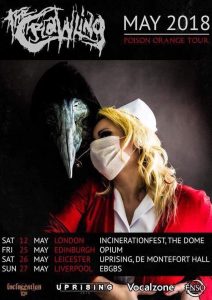 We at Moshville Times have known Northern Irish band The Crawling for quite a while now and the reason for that is rather simple. It’s because The Crawling are that darn good.

They are about to embark on a mini UK tour with shows later this month. If you wonder what The Crawling sound like then I cannot think of a band with a more fitting name. The Crawling play doom/death metal that will keep fans of both genres happy and now you can witness The Crawling live in the flesh.

For a taste of the band, Moshville Times had an exclusive video premiere from their latest album Anatomy of Loss called “A Poison Orange”. Support them on the tour as they are making the effort travelling from Northern Ireland. Support the underground!!!