Croydon has a long history of being one of the UK ́s biggest and most important music hubs spawning world- famous artists like David Bowie, Billy Idol, Adele, Amy Winehouse, The Damned and many more.

It used to be one of London’s most vibrant centers of new music with classic venues such as The Cartoon and Fairfield Halls plus thriving live-music pubs all around town. Over the years, The venues have shut down and the music scene in Croydon has been forced underground. There is still a huge desire for live music throughout the borough and a high demand for quality venues to house the hundreds of up and coming bands and artists. 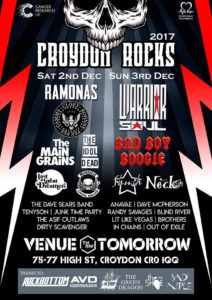 Local business owners Richie Hudson and Pete Wall spoke about hosting an event that would inject life back into Croydon’s rock scene. With the recent opening of Croydon’s TMRW venue, they decided to put their ideas into practice alongside the event organisation expertise of Hannah Godhe, and give Croydon its first Rock Festival in 2017.

Richie Hudson says this about the event:

We are organizing the largest rock festival Croydon has ever seen to bring live music back to the borough and place it firmly at the top of the UK ́s rock music mountain! We want to give local, national and international artists a place to show off their untapped talent, and also a chance for people to explore and experience live music and good times!

Croydon Rocks will be headlined by The Ramonas, an all female Ramones tribute Act, and Warrior Soul, a classic punk rock act from Detroit who are internationally renowned for their rockstar status stemming from the 90s.

Croydon Rocks aims to support local business, local bands (as well as national and international bands), and also two charities in their endeavour to put Croydon back on the live music map.

A percentage of ticket sales from the festival will be donated to both Cancer Research UK and also the British Heart Foundation.

Other supporters of Croydon Rocks include Rockbottom, a local music store, and other Croydon venues such as The Ship, The Green Dragon, The Bad Apple and The Odd Shoe.

(After party at The Ship, Croydon)

(After party at The Bad Apple, Croydon)

You can purchase both day and weekend tickets from here.