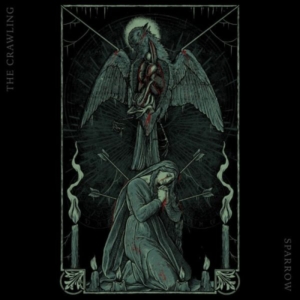 Northern Irish death/doom trio have announced plans for their new single, “Sparrow”, set to be released via Grindscene Records on April 2nd. Pre-orders can be made right now.

“Sparrow” was recorded over the lockdown period, produced, mixed and mastered by vocalist/guitarist Andy Clarke. The song is a haunting tale of isolation, misery, and the emotional outcome of living a pointless life; amplified by the fact so many ‘spectate’ a chain of events, without offering support. Additionally the single features a surprising B-Side cover; a version of Bjork’s “Play Dead”.

The artwork was created by Irish artist Kelvin Doran from Serpent Tusk; a fantastic piece, uniquely designed for The Crawling, inspired by the lyrics and demo tracks.

I became so frustrated over the last year; I felt like our whole existence had come to an end; the endless cycle of nothingness was overwhelming. We began writing “Sparrow”, a tale of not fitting in and the purposeless of being, early 2020; all of a sudden it became clear we had to release it. We got work, and recorded our parts individually, It was a challenging process, but it worked. The Bjork cover was decided by drummer Gary; the lyrics and vibe fitted perfectly, and it was an enjoyable experiment to translate a pop song into doom death metal!

[…] told you the other day that it was coming… and now it’s here! Death/doom trio The Crawling have released their […]