Chicago based progressive thrash metal band Aftermath has released a full stream of their highly anticipated new album, There is Something Wrong. Originally premiered on Metal Insider, There is Something Wrong is out now for digital download via Zoid Entertainment, INGrooves, and TLG, with pre-order of the physical CD available now for shipping in March (and will be available in-stores and online), as well as European CD / Vinyl also in March on Sleaszy Rider Records.

Los Angeles Latina punk quartet Go Betty Go have announced that their 2005 album Nothing Is More is seeing a vinyl pressing for the first time ever, courtesy of LA-based Wiretap Records. Originally released in 2005 via SideOne Dummy Records, Go Betty Go have established themselves as one of punk rock’s most exciting forces to come out of LA.

To celebrate, the band is headed out on a West Coast run in March with The Dollyrots hitting spots in Texas, Arizona and back home to Southern California. (See dates below). The band is also making their Punk Rock Bowling debut by being tapped to play the May 26th Club Show featuring Nerf Herder, Direct Hit and The Vulturas at The Beauty Bar. Tickets for that show are on sale now.

They are also working on new music and plan to visit the studio in the next coming months. 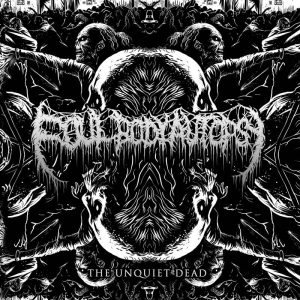 Join us as we travel back to the post apocalyptic world of Foul Body Autopsy! Last year Tom Reynolds, the man behind the Foul Body Autopsy name, took us on a violent adventure through a zombie infested world with the George A. Romero inspired concept album, This Machine Kills Zombies.

Now, the man described by Angry Metal Guy as, ‘a fucking riff machine’ invites us to return to the kingdom of the undead with conceptual EP, The Unquiet Dead. The battle with the flesh eaters has been comprehensively lost and earth lies wrapped in a deadly cloak of radiation poisoning. Mutants and monsters stalk the irradiated wastelands and the last remnants of mankind have gathered in a last safe place, a final bolthole, a stronghold they call Sanctuary. The Unquiet Dead tells the story of one man’s desperate quest for Sanctuary.

With The Unquiet Dead Tom Reynolds has really expanded upon the concept of what Foul Body Autopsy can be. While staying true to the intensity of his musical origins he has looked to new horizons and the results are superb. The Unquiet Dead will be unleashed on CD and mp3 download on March 6th.

Nine Shrines arose on the scene in 2014 from the ashes of aggressive 00’s Ohio band pedigree: drummer Andrew Wetzel (Attack Attack!), bassist Devon Voisine and lead guitarist Andrew Baylis, (Life on Repeat), rhythm guitarist Even McKeever (Downplay), and singer Chris Parketny (Strangers to Wolves). Since the release of their debut EP Misery in 2017, the band have shared the stage with the likes of Volbeat, Halestorm, Chimaira, Shinedown, All That Remains, and Nonpoint.

The band have also dropped the official video for their new track “Nimrod”, which you can check out below.

“Nimrod” is a character, our mascot. It’s the opening song and a good introduction to what’s about to happen. “Nimrod” is a revenge song — a, “you think you’ve crushed me, but now the tables have turned” type thing. It’s about someone who’s devalued you and worn you down and think they’ve destroyed you. It’s those bad things that define you — whether you let them destroy you or use them to get stronger is up to you.