Some album news for you on this fine Friday!

Florida’s Trivium have spent the past decade-plus, building their reputation and steadily rising to prominence, becoming one of the main torchbearers of heavy metal in the modern era. With millions of albums sold globally and numerous world tours (from Ozzfest, Mayhem, and Download to opening for Metallica, Black Sabbath, and Iron Maiden to extensive headline treks), Trivium began their journey in 2003 with their debut album Ember To Inferno. The record quickly captured the attention of the band’s earliest fans as well as the ears of A&R reps at Roadrunner Records, who rapidly signed the band and went on to release their watershed album Ascendancy in 2005. Ember To Inferno was the catalyst for what was to come and it has been out of print for several years… until now. The band and 5B Artist Management have partnered with Cooking Vinyl to re-release the album, along with a deluxe edition that includes 13 additional early versions of songs that have never been previously available yet have earnt evasive legend status among the diehards. It’s a true treasure trove of material that will delight the staunchest Trivium fans and beyond. Ember To Inferno will be released in four configurations, with the deluxe editions containing the band’s earliest songs “Ruber” (aka the Red Demo), “Caeruleus” (aka the Blue Demo) and “Flavus” (aka the Yellow Demo). Fans can pre-order all formats online here. 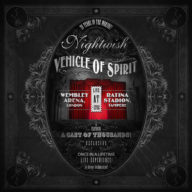 After touring for a year and a half throughout almost every corner of the world and leaving fans of all nationalities breathless, the time has come for Nightwish to immortalise their Endless Forms Most Beautiful tour on DVD. Therefore, the symphonic metal visionaries are set to release their new live milestone Vehicle Of Spirit on December 9th, featuring not only two full concerts, but also plenty of bonus material. You can check out the opening track ‘Shudder Before The Beautiful’, recorded at the Wembley Show in London below:

Music For Nations have announced the reissue of Cradle of Filth’s genre-defining 1999 EP From The Cradle to Enslave, to be pressed on vinyl for the very first time. Set for release on the 28th October, the EP features new coloured artwork, and is pressed on blood red vinyl, an appropriate colour for the UK’s biggest black metal band. The re-issue includes three original tracks; title-track “From the Cradle to Enslave”, “Of Dark Blood and Fucking”, and “Funeral in Carpanthia (Be Quick or Be Dead version)”. Alongside this comes comes Massacre cover “Dawn of Eternity” (a track that previously appeared only the US version of the EP), as well as other covers by The Misfits (“Death Cines Ripping”) and Anathema (“Sleepless”). There is also a remix of the title-track, re-titled “Pervert’s Church.” You can check out the animated video for “Sleepless” below:

Following the announcement of their eagerly anticipated debut EP, As Lions have revealed the video for the new single and title-track ‘Aftermath’. ‘Aftermath’ is the first single taken from the debut EP which is released today (October 14th) digitally in the US and both physically and digitally in Europe via Better Noise Records. It features four dynamic tracks encompassing grinding rock riffs and rhythms with majestically sweeping strings, stately piano tinklings and atmospheric electronics, topped with frontman Austin Dickinson’s soaring vocals and introspective lyrics. You can check out the video below: