Yay! It’s Friday! And what better way to kick off your weekend than with some album news for you!

The pre-orders of The Sleeping Gods – Thorn, a full-length album comprised of rare material from 2010/2011 out on By Norse Music start today. For the first time this unique collection of experimental material and connecting with the band’s early roots will be available as an album, marking also the conclusion of their 25th anniversary year. Costin Chioreanu of Twilight 13 Media (Roadburn Festival, Opeth, Darkthrone, At The Gates, etc.) did the beautiful new layout, including mesmerising new illustrations, displaying a unique symbiosis between two of our times’ most exciting visual and sonic artists.The album has lyrics sung in both Norwegian, English and Old Norse, and the theme centres on mythology and the esoteric side of the runes; as well as contrasting the Norse Ways as a polytheistic belief system to the monotheistic plague of the Big World Religions. The music nods respectfully to the wildly varying deities that make up the pantheon of our inspiration, both “then” and “now”. You can preorder the album in various formats here.

Sonata Arctica
Finnish power metal titans, Sonata Arctica, will unleash their new studio album, The Ninth Hour on October 7th via Nuclear Blast. Today, the band have released the first track by track instalment, in which the band explain the meaning behind the first four songs of the album. You can check out the video below:

The latest album of Luca Turilli’s Rhapsody, Prometheus, Symphonia Ignis Divinus, was chosen to be the first studio album in music history to be remixed in Dolby Atmos. Renowned producer/mixing engineer Chris Heil (David Bowie, Bryan Adams, Scorpions) mixed the entire masterpiece in Dolby Atmos – the mind blowing result will be submitted for the 2017 Grammy nominations. Prometheus, The Dolby Atmos Experience + Cinematic & Live will be released December, 9th via Nuclear Blast. But what actually is Dolby Atmos? Cinemas discovered this new format and integrated loud speakers in their ceilings to place the listener into an ‘acoustic honeycomb´. Michael Geise from Yamaha explains:

“This novelty has now reached the home technology and we at Yamaha wanted to support the project of Luca Turilli’s Rhapsody with an audio-bluray-disc in Dolby Atmos. It’s a very thrilling challenge and makes this release a vivid and new experience. And since we are always looking for new contents, the cooperation with Luca Turilli was a great idea for us. Dolby Atmos is already included in our receivers and the customer can immediately use it – but so far only few releases support this new format and usually it is only available for films, not for music blurays. But now it is and we created a medium that could easily bring instruments to life, without any artifical effects. We had the know-how to turn this performance into a real live experience with our loudspeakers, receivers and the new sound bar that brings the musicians almost right into everyone’s living room!”

To get a better idea of what Dolby Atmos is, you can check out this video by Onkyo below: 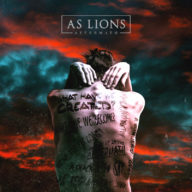 UK rock outfit As Lions have announced their debut EP Aftermath, out October 14th via Better Noise Records. The EP will be available digitally in the US and physically in Europe. The EP’s four dynamic tracks are a study in contrasts, mixing thick, grinding riffs and rhythms with majestically sweeping strings, stately piano tinklings and a hefty dose of atmospheric electronics, all shot through with Dickinson’s soaring vocals and introspective lyrics. In conjunction with the announcement of the EP, the band have also unveiled the title track and first single ‘Aftermath’. You can check out the visualiser for the track below: