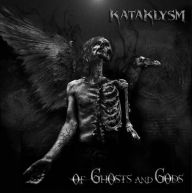 Canadian powerhouse Kataklysm is set to release their twelfth studio album Of Ghosts And Gods this summer on Nuclear Blast.

The new artwork from Kataklysm’s explosive new album was done by up-and-coming dark and macabre artist Art by Surtsey.

The new Kataklysm album cover echoes a sinister artwork depicting the reality of humanity’s beautifully disturbing existence and its impending death through the Mortal and the Everlasting. The background shows an ancient incantation written in Aramaic.

Below is the track listing for Of Ghosts And Gods:

The entire process will be mixed and mastered in the UK by legendary producer Andy Sneap (Megadeth, Testament, Exodus, Amon Amarth).