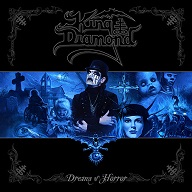 A 2xCD collection of King Diamond songs, newly enhanced into ultimate editions by King Diamond and Andy LaRocque themselves, will be released by Metal Blade Records next month.

King Diamond’s Dreams of Horror is the only “best of” album covering the band’s entire career. King Diamond and Andy LaRocque meticulously mastered and enhanced these 23 songs into the ultimate editions, chosen by the band from both the Roadrunner and Metal Blade catalogs.

Dreams of Horror will be available on November 11th. Listen to “The Puppet Master” from disc 2 and pre-order a copy now at metalblade.com/kingdiamond.

In other news, King Diamond vinyl has been made available throughout 2014. Currently, vinyl versions of Them, Abigail, The Eye, Fatal Portrait, and The Puppet Master are available now on the Metal Blade webshop. Conspiracy and In Concert will be coming this January! Copies of the vinyl are available now at IndieMerch.