Swedish Metallers In Solitude are heading out on a European tour together with Finnish Rockers Beastmilk, starting from October on. Scandinavian colleagues Obnoxious Youth will support them.

Comments In Solitude: “We’re very glad to announce this headlining tour, and we can’t wait to steer and spill death’s lights in Europe again. And in such splendid company. We’re sure this will be something particularly steep and special for all of us!” 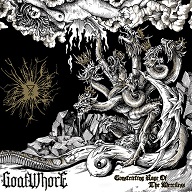 With the release of their hugely anticipated new long-player, Constricting Rage Of The Merciless, now less than one month away, New Orleans devious metal merchants unleash all out Hell with “Schadenfreude”, currently corrupting the airwaves of mega music portal, Loudwire.

Literally meaning the pleasure derived from the misfortunes of others, ninth cut, “Schadenfreude,” is at once predatory, epic, misanthropic and sadistic. Notes vocalist Ben Falgoust of the debaucherous hymn:

“This song represents the downward spiral of man at his most vile. The seething element of satisfaction when others around fail and fall, then the gratitude that this sickly rejoicing has accomplished in the overall end.”

“‘Schadenfreude’ is a classic take-no-prisoners, leave-no-survivors type of Goatwhore track. The band’s black metal influence is at the forefront of ‘Schadenfreude,’ as guitarist Sammy Duet builds a dark atmosphere with his open chords and sinister progressions, while vocalist Ben Falgoust explores his full guttural range throughout the track.”

Feel the wrath of “Schadenfreude”, now playing at LoudWire.

Metal Blade Records is proud to announce the addition of German thrashers Cripper to its roster! Cripper are convincing with their enthralling mix of old-school and modern thrash metal. Served with technical refinement and a lot of groove, they kick ass while being varied and distinct. Since their founding in 2005, the guys and gal from Hannover, Germany have left their marks as being a rousing live band, carrying the audience with dashing songs and sweaty shows. On tours with Overkill and Onslaught, Cripper have spread their virus throughout Europe. Once a big festival was infected, they would book the band again – Cripper played several times on festivals such as: Summer Breeze, Wacken Rocks, Metalfest, and Rockharz Open Air. But there’s more – boarding the well-known 70,000 Tons Of Metal cruise ship from Miami twice, playing the Brutal Assault festival in the Czech Republic, shows at the Bang Your Head, in Belgium, the Netherlands, Poland, Austria, Switzerland and being invited to enter the stage of the Slovenian Metaldays five times have allowed Cripper to gain international recognition and a continuously growing fanbase.

So far, Cripper have released three studio albums and with that formed their distinctive style. The creative works of this highly motivated self made team is always showing through in three different aspects: the album artwork, merchandise, and so far four complex and artistic music video productions that the band has self-produced from start to finish. Some new song material is ready, which will form the cornerstones of the upcoming album are set. Fire at will!

“Crazy shit! We are part of the Metal Blade family now! Cripper is a self-made band. Despite never being signed to a real label, we have released 3 albums, toured Europe a couple times and even made it across the ocean twice. Being control freaks in every possible way, we were very content with our situation, but still we started to feel like it is time for a change. We were highly motivated to produce a new demo to see if Metal Blade liked our new stuff. To make a long story short: they did, and so we are here now, ready to walk trough newly opened doors and taking the opportunity to reach more people with our music. With Metal Blade we keep our self-made attitude regarding our artistic freedom and full control, only now we get the chance to present ourselves on a much larger platform. Our upcoming album with the title Hyena is in the making and we hope to release it worldwide in November!”