The power of social media. Out of the blue you get contacted by a band member who has been referred to you by a friend and low and behold, you end up liking the music yourself. Insisting that they want to get pissed and play gigs seemed like the perfect opening line for an interview for a band who hail from the same neck of the neighbourhood as you do. Drunken Aberdonians Deadfire who reached the final of Glasgow Metal to the Masses in 2019 and played to a sold-out Ivory Blacks have gone from strength to strength and with a new EP on the way, now was the right time for me to catch up with frontman and gentle giant Charlie. Wish the band good luck and see you the next time you are on the road.

Deadfire originally formed in 2013 and been through a couple line up changes mostly bass (laughs) myself (Charlie ) and Tunk are original members and Jonny and Boothy joined October 2018. 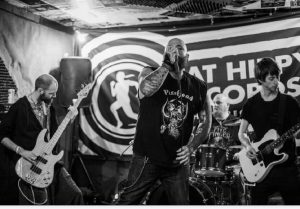 Dunno about unique I’m sure it’s all been done before haha I’d describe us as old school rock/metal with a stoner grunge tinge. We’re more unique on stage, I think.

In February, you are about to release your latest EP. How does it feel to get the new songs out there for the masses to hear for the first time and how have the reviews been?

Reviews have been great very positive when we came back in October 2018 we hit it hard gigging up and down the country and touring Europe . We even came in the last 5 in Bloodstock Metal to the Masses competition which is not bad for a rock band in a heavy metal contest. So it’s now time to release some new music with our new line up show everyone Deadfire are back sounding different but the same.

Being active for a few years now, how would you say it compares to that of your earlier material and do you think you have found the sound you strive for or will Deadfire continue to keep experimenting?

I think we naturally always sound like Deadfire don’t know why but I think if you heard our new stuff you’d know it was is straight away. So yeah I think we have our sound.

How are the songs constructed in the studio? Are there the main songwriters of songs that take care of everything or is Deadfire a band where all members contribute to the songs?

All songs are written at jam by the band. Maybe Jonny and Boothy will work on riff ideas beforehand but usually starts with a riff idea we all change and mould into what we want. Songs just write themselves from there. Lyrics have always been my thing, I write some really personal lyrics especially on Hounds of Justice, our second album. But this time around I’ve been a bit more open to share. Boothy co-wrote “Mary Jane”.

Is there a main lyricist within the band? What are the lyrics for the EP based on?

I’m the main lyricist, the 3 songs on the EP tell different stories. “My Mind Belongs to the Devil” is about being in a situation where you feel your self acting in a way you know is not you. I’m doing bad things but I know I’m better than that. Looking for forgiveness probably from myself. “Mary Jane” is a true love song. About that girl that we can all rely on… “Mary Jane”, easy. “Call From The Void” is that feeling you get standing on the ledge or in front of traffic… The ‘what-if’ feeling. What would happen if I just… I feel it can describe many scenarios in daily life. What if you just…

Being a four-piece band and having different musical influences within the band, is there sometimes a lot of negotiating in the studio or do you feel you are writing the music you want to for the band?

Nah, I feel we all bring different influences but all pull the same direction.

How hard has it been to juggle the touring side of things with the everyday jobs? Do you have plans to go on more bigger tours and further afield in 2020?

Touring is our holidays (laughs). We have very understanding, long-suffering partners, so it’s all good. We will definitely tour in 2020, maybe August time. But we have lots of gigs lined up and a few festivals too.

You played Metal to the Masses last year in Glasgow. How was the experience for you and what festivals do you have lined up for this year?

We only took part on Metal to the Masses to get a gig at Ivory Blacks. But kept winning our heats. Next thing we know, we are in final 5 playing a sold-out Ivory Blacks. On the day of the final, we could see on Facebook all the other bands in rehearsals we were pub crawling Glasgow. We rehearse enough to be tight as fuck so when we play we enjoy it any way we want, usually drunk. We have a couple in the pipeline but are confirmed to play Wolfstock in August.

How hard is it for a band like Deadfire to survive in the current climate where bands have to tour non stop and sell merchandise in order to bring money back into the band?

We’ve never done this for money, we all work full-time jobs so we are financially stable as a band. We very rarely get paid and less than that asked to be paid. Any money we make on gigs or merch goes in the bar kitty.

Before the internet, magazines and fanzines were the places to find out about new bands and trends. Now publications are replaced with thousands of websites catering for all genres. Do you think that some of the passion has been lost or do you think that the internet has been a good thing for music and Deadfire?

Some buy magazines, some use websites, same as some buy CDs and others stream. Shit moves on and changes all the time. We go with the flow (laughs).

You are now on the Fat Hippy Records roster. How has it been to work with them and what are they doing to help push Deadfire to the next level?

We’ve been with Tom for years now he was the making of Deadfire he gave us vision and direction and reigned us in enough so that we are still is but more palatable. Tom is massive in helping keep the Aberdeen scene alive and has worked tirelessly for years for bands.

Being from the Aberdeen area, are there any other bands from your local scene that you would recommend and give a shout out?

Jonny (guitar): The Used – The Used

Check us out on all music platforms. Check our EP when it drops. Come see us live, you need to see us to understand.