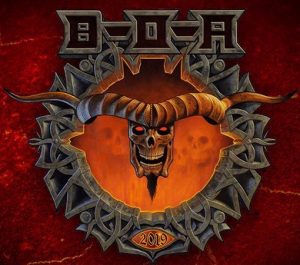 As a band we’ve been playing together and gigging for just over a year, but we’ve been writing since the start of 2017 and we’ve played in a few different bands together over the years, so our musical chemistry was already well established beforehand.

Our name comes from the Gaia hypothesis – a concept coined by the author James Lovelock about the Earth being a living organism. In particular his book The Revenge of Gaia and the theme of the Earth fighting back against humanity was a huge influence on choosing the name Gaia for a metal band. Prior to deciding on the name Gaia we had a list with a ton of other names we’d come up with on it, but Gaia stood out for its simplicity and for it not leaning towards any specific genre of music.

Our sound combines a lot of different influences and features from progressive song structures, deathcore breakdowns, djent polyrhythms, technical death metal lines, jazz chord progressions to ambient synth sections. I think that the wide range of music that we draw our sound from helps us to stand out as a unique band.

Our live show is always full of a lot of banter and crowd interaction! We want our show to be entertaining on multiple levels and not just musically, although we all definitely give 100% with our playing and performance to be as tight as humanly possible.

Our vocalist, Jack, actually works at Bloodstock every year, but besides him none of us have had the chance to go until now!

We won the Brighton M2tM!

Incredible! Absolutely blown away and very grateful for the opportunity.

Expect a lot of head banging and moshing moments as well as some more chill progressive moments; our sound is very diverse so hopefully there’s something in our set for everybody!

We really want to see TesseracT again because they’re a huge influence for us, as well as Harbinger, Parkway Drive, Sabaton, Soulfly, Thy Art Is Murder and anyone else we get a chance to see!

We have an EP coming out very soon that we just finished recording that should be out this year, and we finally have merch for sale! Once the EP is out, we plan on gigging as much as possible to spread the word about Gaia and to also raise money by selling merch to fund our next release. It’s already mostly written so it should be out next year!

One of the wildest things I’ve seen at a gig was the frontman of SHVPES getting his long hair cut off on stage for charity when I saw them support Trivium and Sikth at the Roundhouse in London. It was a good thing for a good cause, but it was a huge shock to see out of nowhere!

We’re lucky that usually when we play shows beer is provided for all of the bands, but we tend to wait until after we’ve played to have a drink because of how technical our set is, it’s hard enough to play sober!