Heart of a Coward are currently gearing up to release their brand new album, The Disconnect, via Arising Empire records. Prior to the release, I had the opportunity to have a quick chat with bassist Vishal Khetia about both the new album and the plans going forward. 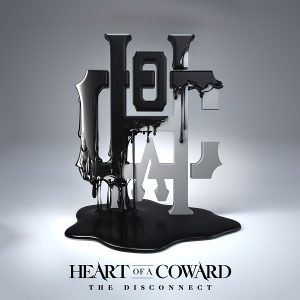 How do you feel the response has been to the songs you’ve released so far off the new album?

Starting off with the initial release of “Collapse” in March 2018, I think that for us was the most nerve-wracking moment we’ve had as a band. We self-released that as a band with no label or management. There was just the five of us and a friend who helped get the campaign going and that signified we were back. The response we had when we released it was incredible and it actually felt like a new band as we’ve obviously got a new vocalist and changed our sound a bit. We have a lot of love for our fans who’ve stuck by us all this time. We did a tour off the back of that one song in the UK and it pretty much entirely sold out.

Coming onto our most recent single, “Drown in ruin”, that again has been really well received. I don’t think I’ve seen any negative comments or reviews of it which is really great to see. As I said before, we have a lot of love for the continued support from our fans. We’re really eager to release more songs to our fans so that they can enjoy it as much as we can.

If you had to pick a favourite song from the album, which would you pick?

It’s been mentioned in other interviews that it took a while to get the ball rolling on this record. Would you mind elaborating on that?

As you said, when we first started it out it was so difficult because we didn’t have a full lineup. We didn’t know what sound we were looking for and as a result there’s been some songs which are on the backburner and didn’t make it to this album. We were all quite busy in our day jobs and not having a vocalist made it more challenging for us to get the process started.

When we started auditioning vocalists, we had hundreds of people apply for it which was really overwhelming. It made it really difficult for us to pick but then we stumbled upon Kaan. Kaan was a good mate and had been on tour with us and having him enter the fold gave us a bit more direction. I think what really allowed us to be creative with this album was that we stopped really caring and wrote what we wanted to write. We decided to write the music for the same reasons we started writing all those years ago.

Was Kaan quite involved in the process of writing?

I’d say it was the first time in any music project personally where we’ve all had input into the vocals. Everyone chipped in and worked together to create the sound for this album. It was really welcoming and nice to have everyone involved in the writing process. We’ve all got really different influences which allowed us to create something more unique this time.

You also worked with Justin Hill and Will Putney again. Was that for convenience or that you’d worked with them before?

We’ve always said that Justin Hill is almost like another member of a band. Nowadays you can work with anyone, but it was about that trust we had with him. We knew he would do a good job and he’s like a friend to us. He really helped us streamline the music and we couldn’t miss out on not working with him. We used Will again as we’d done the initial single with him which sounded great and we wanted the same sound on the album.

What equipment did you use for this new album?

We used Kemper amplifiers which we used for Deliverance as well. We can profile any sound we want and what we did the same as last time, was that we profiled my bass rig into the Kemper. As a result, that meant we didn’t need to keep lugging gear back and forth from the studio. All we needed was a USB stick with the profiles on. Technology these days is fantastic!

I’m currently with ESP basses and I used a B series LTD bass for the recording. I also used an E series ESP bass for some tracks on the record as well. We play in quite a weird tuning so having a bass that holds the tuning is key. We actually played a semitone higher on this album which was nice from my end as the low end didn’t feel as rattly!

You’ve got some shows coming up around the release of this album. Are you looking forward to that?

Absolutely. We’re all buzzing to get back out in the UK and meet both old and new fans at the show. We’re so appreciative of all the fans that have been with us over the years and we’re looking forward to bringing our new music to them. We’ve got some really killer support bands with us on this run and we’re itching to play the stuff. We’ve had this music for a long time and when we jam it in the practice room it sounds huge. I can’t wait to bring it to the fans.

A guest question from Port Noir: If you had to switch instruments in the band, who would play what?

We’ve done this before in the practice room after taking a break as a bit of fun. I would say that Carl our guitar player would be on drums. I’ve seen him on the drums and some of the parts he absolutely nails. I could probably see myself as a guitar player as that’s what I primarily am. I’d put Steve on Vocals as he likes to scream. Kaan I’d put on bass as he’s got a lot of groove. I’d keep Steve on guitar as he’s so good at shredding.

Do you ever doubt the decision to become a musician?

No, I don’t think so. We don’t do it full time to be able to resent it. This is something we very much love doing as we have a lot of passion for it. I speak for everyone in the band when I say that we will never doubt the fact we became musicians. It’s shaped who we are today and given us some of the best experiences in our life. It’s definitely done a lot for us rather than take anything away from us.

Coffee, it has to be. But, a Cappuccino. Unsweetened, plain and simple.