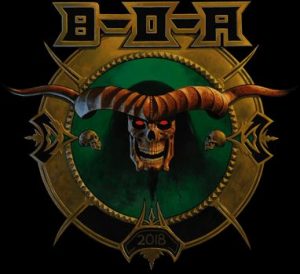 We are from Aylesbury, Buckinghamshire.

It’s been so long since we named the band we can’t actually remember. We were young and I suppose we went with what sounded cool to us at the time. I think the band name better encapsulates what we are about and the subjects we write about more now than then. I guess you could say we grew into the name.

We have a lot of energy and a good mixture of songs that I feel cater to a wide audience, from the brutally heavy to the contagiously groovy. We’ve also incorporated our own light show in to the performance. For us, playing live is more than just standing there and playing your stuff. If you’re not engaging with the audience either personally or have some kind of production value to your set it’ll be more difficult to stand out.

Our vocalist Jordan, bassist Richard and guitarist Connor have. Only as fans. This will be our first outing as a full band.

Did you enter M2TM thinking you could win it? Which region did you win, or did you come through other channels?

We entered the competition in Oxford with the hope of winning for sure, but I don’t think we necessarily thought we could. The calibre of bands we were up against was high and the final itself was a difficult one to judge. I know if I was judging it myself I would have struggled. We definitely had to push ourselves to a new level and go super Saiyan.

Bounce till you drop grooves and bone crunching heaviness. All rolled together into a burrito of brutality.

The list is long but here are a few: Bloodbath, Orden Ogan, Alestorm, DevilDriver, Fozzy.

Currently we are working on an album that we start recording at the end of September. So if all goes well that should be ready to release in the new year.

I’m not sure about ‘wild’ but our vocalist Jordan once did a gig in a penguin costume and almost passed out because he was so hot in it. Or there was this gig last year where the crowd were doing ‘big fish, little fish, cardboard box’ to one of our tracks called “Human Culling Farm”. That was definitely an interesting site. Naturally Jordan joined in with them.

Jager is a drink that could have only been made by the devil himself. So, Jager!