Our first experience of Dead Label was when they opened for Fear Factory a year or so ago and let me tell you, it’s all positive. A three piece with a ridiculous amount of energy and aggression, powered along to the beats of Claire Percival. 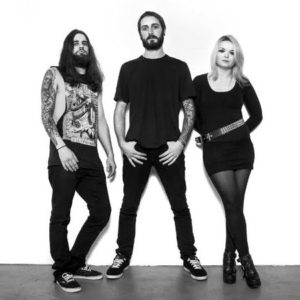 Claire’s deceptive. Alongside her bandmates, she’s particularly petite with the look of a delicate but dedicated rock chick… and then you see her pounding the skins and you realise that what they say about all the best things coming in small packages really has a lot of truth to it.

Dead Label are currently beavering away at a new album and have a couple of low-key shows coming up. But I’ll let Claire tell you about all that…

You sound a little busy… two festival appearances this summer? Which is the bigger for you, bearing in mind that we have a stage at Wildfire?

We have been chasing poor Andy for years! He was extremely nice to us and checked us out. He offered us a slot. It’s very cool because he’s like the busiest man in the business!

You’ve been working on new songs for the upcoming album. Are we likely to hear any new material at either show?

100% we will be playing loads of new stuff – testing it out on you mentallers! If there’s mosh pits, it makes the album. So it’s really up to you!

Any updates on the album? Still on course for a 2018 release?

We have nothing set in stone. We’re taking it all as it comes. We have lots of material but we want to make sure everything comes out in the right way. We have a load of stuff that’s on the horizon too, so it’s just about balance.

Talking of 2018, you’re also on the bill for Hammerfest X. Do you have any plans for your own dates in the meantime or will all your efforts be on the album?

We will be touring as much as possible while writing too! We are very excited to play at Hammerfest. Try meet Vinnie Paul too, that’d be so cool! But yes we will be playing as many shows as we can.

You released a video for “Pure Chaos” (see below) recently. Was the vision for the video yours or the directors’?

It was the directors’ vision completely. Shaun and Jeff of Crooked Gentlemen are amazing. We gave them the track and said we want a kick ass video. They did the rest!

Why choose that track to be enshrined in celluloid? Was it always going to be one you’d make a video for?

Yes, we had other songs written but we wanted that one known for the Summer!

How do you feel a video helps you as a band? Does it extend your reach to new fans?

It is so important to have video. It’s so much easier to get people’s attention. Spotify helps, Soundcloud helps but video captures more people. It is important to present your song in the best possible way.

Any plans for warm-up shows in the run-up to festival season?

Yes, we have a special show planned at home here in Dublin to kick off the Summer. It will be announced very soon!