Fresh off the back of the little matter of introducing mini-Dollyrot number two to the world, Kelly Ogden and her partner-in-crime Luis Cabezas are about to release Whiplash Splash on the world. It seems every time Kelly gets pregnant the band use it as an excuse to stop touring and work on new material! During a brief gap in their hectic lifestyle, Kelly managed to juggle CDs, baby bottles, nappies and a telephone and chat to Moshville Times’ Amy. Here follows part one of the interview, the more music-y end of things. Part two is now online! 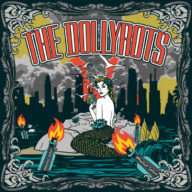 It’s been a busy year for you: pregnancy, new baby (Daisy Moon) and your Pledge Music campaign for new album Whiplash Splash. How do you find the time?

I have no idea, right now we are panicking. It’s hard to find the time. Right now we have agreed to too many things, but we force ourselves to finish them somehow. We say yes, yes, yes and somehow everything seems to get done. But our sanity is sometimes at stake. Mostly sleep though.

How is it being a couple in an internationally touring band?

I think it is partly as Luis and I have grown up together. We have known each other since we were twelve. Started dating in our late teens. And then started the band so the band thing came after being totally codependent already [giggles] so we work very well together and at this point we have been together our entire adult lives. We know each other’s faults and quirks and we just kind of accept each other and go forwards somehow.

Can we expect two Dollytots on the next tour?

Absolutely [giggles]. We leave for tour in about a week and a half. This will be the first time with the both of them. So I expect it to be a little crazy but we are used to crazy. It will be cool. It’s been such a great experience having River on tour. The crazy tours have happened already in the early years. Wasted all the time, sleeping on people’s floors, all that stuff. Before River I kind of felt maybe I am done. I was not enjoying playing, enjoying touring, it was just taking a toll on my body. It lost its joy, it was just the same thing over and over again. I got kind of down about it, but then when we started touring with River, it was awesome because I got to show him all sorts of things and got to experience it together, instead of being hungover and tired, I was happy with my kid… and tired [giggles]. It’s just so much better.

The Whiplash Splash pledge music campaign came out on the 24th Feb. How has that been received?

It’s going so, so well, we are so excited because we always loved this record. Every song we would write we would be like this is my favourite… then the next one would be no this is my favourite. We sent it out and people were like “We’ve listened to this three times in a row, then four times in a row”. Even people that are doing reviews they are so happy about it. I think we did a good job [giggles].

The Pledge campaign went well, getting to 151% of target. Why did you decide to start using Pledge Music, this being your 4th time?

We were on Black Heart records, Joan Jett’s label, for the second and third album. We felt we had established ourselves as a band and we had a fan base and people started doing crowd funding and so we did Kickstarter for the first time and we were like WOW, wait a minute. We had enough fans pre-order the record and use that money to record and send it out and then we also own it. It’s kinda the only way that makes sense for us to do it at this point because we do the band full time and it’s our source of income. So we have to run it like a small business and to give away such a huge percentage of potential income to a record label when we know how to do most of that just seems crazy. Unless there is some fluke and a song gets picked up for something or Warner picks us up for a multi-million dollar deal – not that they would – well they could – but we are the band we are and that makes sense to us and our fans.

We were really fortunate our first record was picked up by Look Out Records and then the second record, Because I’m Awesome, we had already recorded most of it when Joan Jett picked it up for her Black Heart label. Then the third album was the first time we kinda felt that, well, the label is not saying it’s good enough. So that in a way made us want to be independent. We’ve always pretty much stuck to our guns; we never listen to anyone anyway [giggles]. It’s a better experience with the fans too.

As part of the pledge campaign you had a DVD produced. What was that like that have that intrusion into your lives and to have that put onto a DVD for the world to see?

It was magical but also selfish. We really wanted to have a snapshot of that time in our lives. At the time we were like “It is never going to get more perfect than this right now”. We are on tour with our friends, we’ve got River with us, the band is doing good and so it was a little bit of a selfish venture. But I am so happy we have that, not just for us but for River when he grows up to have all the behind the scenes stuff. We are going to have to do it again because of Daisy.

With the Pledge Music campaign, you were able to donate a good portion to the Association of Frontotemporal Degeneration, of which your father unfortunately has been diagnosed. How important was that to you?

I think that until you know someone that has a disease like that it’s very hard to comprehend how weird it is and how hard it is for people. I also can’t help but believe there should be more research and ways that we can prevent it or make it a little bit better. Because there really is nothing that they can do right now. It’s just time and as it goes on, he deteriorates. It’s so tragic. Alzheimer’s, dementia, anything like that is just so strange and it was great to raise a good chunk of money to donate and that makes me feel that in some way I’m helping to do something about it.

Whiplash Splash is released on 24th March and is available now for pre-order on their bandcamp page. We’ll have an exclusive premiere of a lyric video of one of the tracks on the 14th of this month. Check back then!

View all posts by Amy