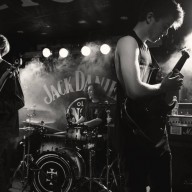 [avatar user=”Progger” size=”50″ align=”left” /]We have already written about prog metal sextet Ursus (one EP review and Band of the Day), but in an interview below guitarist James Matthews talks about the band’s beginnings, the debut EP The Migration, new material, beer, and more.

I have read your previous interviews, and I think that you already told enough about the music. For the beginning tell me how did you guys hook up together and form Ursus?

Well I actually knew Aarons girlfriend at the time about 2 or 3 years ago and she said he was an awesome metal drummer so I hit him up for a jam and it was as simple as that really. He had already been jamming with Dom, our rhythm guitarist, for a while cause they lived near each other so I met up with both of them and it just worked really well. Then we started the search for a bass player and a singer which took the better part of 2 years. We found Ryan online and he came for a try out and was great. We were lucky that the first bass player we tried was so good because lots of bands seem to struggle in that area. Then Jamal who is our third guitarist was going to college with our drummer and when we realised how many guitar parts were on the songs we realised that we were going to need a third so we recruited him. Then finally once we were part way through recording the EP instrumentally Rob messaged us and said he wanted to try out. We played My Plague together and immediately recruited him before the end of the try out.

Your debut EP The Migration was launched in August. Are you satisfied how it’s received?

Yeah we’re all definitely happy and everyone who’s given us feedback seems to love it. It’s incredibly rewarding considering we all put about 7 months into it to hear what people are saying and the response has been overwhelmingly positive. I myself also did the mixing so hearing everyone praise the production so much is really great.

If you are asked to pick a song from The Migration that sums well what Ursus is about, which song would that be and why?

I would have to say that the title track is definitely a good representation of us as a band. It’s seriously heavy and melodic at the same time and the massive clean section featuring Bethany Humphries definitely justifies us being called a progressive metal band. There’s also a really mean breakdown at the end which everyone loves.

In an interview you did before, you said that there are two singles that you will release in the near future. What can we expect from this new material? How much of what you listen to affect your songwriting?

These new singles are in a similar vein to our EP. I wrote the two singles whilst I was still mixing the EP so these were just done too late to get on there but they are fairly similar in a musical style. There is however a full strings section on one of them which isn’t something that we’ve done on the Ursus stuff before. Also these two songs were still written by me so these will be the last songs we release before the writing becomes a completely collaborative process with the whole band, which is what we always wanted it to be.

You can definitely hear the influence of other bands in these songs though. When I wrote them the new Periphery double album had just come out so I’d been listening to Periphery pretty much none stop and I think that influence definitely creeps in there quite a lot.

You guys are based in UK, and for many people outside one of the first things that pops out on mind is weather, which is usually cold and dark. Does it have any impact on your music?

Haha, well the music is definitely dark if that’s what you mean. For someone like Rob, who is the only lyricist for the band, I’m sure that anything like that affecting his mood can influence what he writes. But for me the songs tend to be riffs that have been written over a long period of time that then come together for an end result so my mood at the time of making the songs doesn’t really influence it a huge amount.

How do you see prog metal / djent scene in UK? How much does it help you to reach out to labels or promoters considering that you are from UK?

That’s a tricky one to answer because with it being the popular thing in metal at the moment it seems like there is maybe an oversaturation of that kind of music in the UK scene which can make it very hard to stand out. Saying that though we don’t really tend to play with many prog bands which probably is a good thing because we usually stand out on the bill. Also being near London should seriously help us out in the future but as of now we haven’t played any gigs in that area so that’s something we’re hoping to start doing soon.

In terms of labels and producers there is such a good online network for that sort of thing nowadays that I don’t really think it matters what country you’re in. There’s plenty of websites and Facebook pages for anyone who wants to get in contact with those kind of people.

What was the last gig you attended?

The last gig I attended was actually an acoustic gig at the Fleece in Bristol. Tyler Hilton had come to the UK for the first time in a very long time so I went to see him. But before that I think it was Periphery’s last headline show they did over here in April. I’ve already got my tickets for their next trip over here with Veil of Maya and Good Tiger.

To be honest I’m usually more like a 13 year old girl when it comes to my taste in TV shows but at the moment I’m loving all the comic book shows that are on. Especially Gotham and Arrow which are a little bit darker than the others which I think makes them a bit more interesting.

I love Mexican beer like Corona or anything similar.

What have you been listening to lately?

Well the new Tesseract album just came out and it’s unbelievable so lately I’ve been on a huge Tesseract kick. I just finished watching their live dvd on youtube for about the 3rd time all the way through and it’s still just as awesome to watch because they are flawless live.

Yeah, anyone who wants to hear what we’ve been talking about can go and check out our EP on our Bandcamp page or they can find links on our Facebook. Plus anyone who wants to catch us live can see us at Level 3 in Swindon on the 1st of November which is our next gig date.