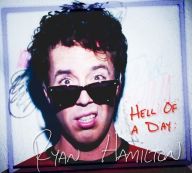 I got a random request from the lovely Lisa at Rage asking if one of us could fire a few interview questions Ryan’s way. I’m not going to turn that chance down – he’s a very chatty and funny guy and I can honestly say I don’t think I’ve giggled so much reading through a transcript as I just did now!

Ryan’s doing a “House Tour” in August/September (read his excuses for not playing in my hovel further down), and his new album – Hell of a Day – is out on August 25th. It’s also awesome, but I can’t tell you that yet ;)

Ryan! Great to fling a few words your way after the PoV tour a few months back. I gather you’ve spent the time since throwing some tunes together…?

Hello! I remember it well! Yeah, I’ve been BUSY!

How would you describe the difference between your solo material and the People on Vacation stuff?

Well, there are a lot of similarities. There’s no getting around it, because as you know, I write and sing a lot of the POV tunes. Haha. However, I thought it was very important to create a sound and a vibe that was my own. It was important to me not to come across as “POV Light” (if you will). I wanted to make an album that felt like California. Like you wanted to drive around and listen to it with the windows down. I’m very proud of the FEEL of the album. So, to answer your question in the longest way possible, haha… I would say my stuff is a little more cheerful, a little less angsty (is “angsty” a word?) … and I was allowed to have some bluesy moments. Because Jaret HATES the Blues. Haha. True!

Are there any guest appearances on the forthcoming album we should know about?

Kelly Ogden from The Dollyrots sings ALL OVER the album. Including a very cool duet at the end of the album. Linus Of Hollywood plays guitar, bass and a long list of other awesome instruments. Scott Simons added some keys. Larry Goetz added some banjo, mandolin and steel guitar. Reade Pryor played drums. Lots of guests! I thoroughly enjoyed enlisting some of my most talented friends, and consider myself very lucky to HAVE such talented friends.

How is the upcoming tour going to differ from the PoV dates? I mean, you don’t have that dude from Bowling For Soup forcing you to have fun and drink or anything…

HA! Contrary to popular belief, I LOVE to have fun. But when you’re trying to keep up with Jaret. 2 bottles of wine and going to bed a little after midnight is never enough! Haha. People forget that I had a career in music before I knew Jaret. So I’m completely comfortable and capable on my own. The upcoming tour is HOUSE PARTY TOUR. Which some people think is insane. Playing shows in people’s living rooms??? Seems crazy. But they are some of my favorite shows to play! No other experience like it. Lots of drinks. Lots of laughs. Lots of (hopefully) good music… and a memorable night not soon to be forgotten. I guarantee it.

Is it annoying that there’s a comedian who’s stolen your name? Or, to be fair, just happens to have the same one? Annoying enough that you would have his website hacked? Google reports “ryanhamiltonlive.com” as “this site may be hacked”!

It’s a little annoying. There’s also a hockey player named Ryan Hamilton. I’m just going to have to keep doing my best to make sure I’m the Ryan Hamilton that works the hardest! Or maybe I should change my name. I could do the single name thing. Like Madonna or Prince. But somehow I don’t think people would buy that from me ;-)

Obligatory whinge – why no dates outside of England on the House Party tour in August/September? We miss you, man! You can stay at our house. Come oooooon!

Haha. Man, it was SO HARD to narrow it down to the homes/stops we did. I got almost 400 emails from people wanting host one of the House Party shows. I wish I could play them all! When it comes to these particular shows A LOT of things factor in. Are there hotels close? Parking? Is it close to a train station? Is the house big enough to hold 30-50 people? etc… I’ll just have to keep doing these fun tours and make sure I get to your part of the world next time!

Who’s coming with you on tour in the UK (England!) or are you using local supports?

My friends Lacey and Danny Gruff are joining me at a couple of shows. Dave Kerr as well. I’d actually really like to have different, local artists play a few songs at every show. I’m a big believer in supporting local music and artists helping each other out every way they can.

I’m going to regret asking this (or maybe I need to get you drunk first), but what’s the most insane thing you’ve done on tour? This is the UK, we don’t have the Fifth Amendment so don’t try that one!

I’ll never tell!!! But in includes A LOT of alcohol, a drug dealer, a beach, nudity, a jar of processed cheese and a considerable amount of vomit.

Another toughie. Pick your favourite child – solo material or PoV?

Man… that’s tough! My solo album obviously feels more like MINE… and I have to share POV with Jaret. But I am SO PROUD of the music POV has made, and the success we’ve had. How about this? The solo album isn’t out yet. If it does better than POV’s stuff, I pick THAT ONE. Haha.

Random question to finish with. If you hadn’t made your way into the music industry as an actual performing artist, what do you think you’d be doing for a living?

Nothing. I don’t know how to do anything else. Hence working as hard as I can every day to make it in this fucked up business that I love.

P.S. Don’t tell my wife I offered to let you stay at our place…

I’m totally going to tell her.

Review: Ryan Hamilton – Hell of a Day | The Moshville Times

[…] we spoke to Ryan a couple of months ago, he said he was aiming for an album that would be perfect for listening to as you drove around with […]