We love a good solo act here at Moshville Times and it’s always a pleasure to be able to feature another one. This time we have a home-grown artist from one of the nicest cities I’ve ever lived in! 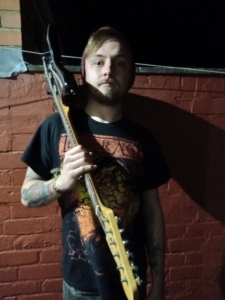 I originate from Durham, UK.

How long have you been playing?

The name suddenly came to me when I was trying to think of something topical that would paint a brief picture of the music. I settled on Aural Decay, which made me think of what some people might experience with my music, bust eardrums!

Some of the key influences of the project are various bands from the progressive metal scene such as Periphery, TesseracT, Spiritbox and Meshuggah. I also take influence from progressive death metal bands such as Humanity’s Last Breath, Black Crown Initiate and Opeth.

My aim for the music is to take the progressive metal blueprint while making it accessible to a wider mainstream audience. This can be done in ways such as making irregular time signatures be perceivable as common time, or using catchy melodies and hooks. I feel as the project has progressed my pool of influences has grown which has opened up new possibilities for ideas to incorporate.

A lot of my lyrical themes tend to explore the depths of my experiences in life. I feel as though these dark caverns of our past can be addressed and adapted into a form of beauty, through song. It’s a great coping mechanism and it somewhat feels absolving to have sung about it then moved on.

The project actually began during the first Coronavirus lockdown so unfortunately, I have not hit the stage yet!

I played as part of a University Ensembles band performing original material a few years ago. During our first performance I leapt off a speaker that turned out to not be secured to the ground, sending it flying but fortunately not cutting the performance’s sound!

I played a Fender Blacktop Jaguar as my primary instrument for several years for almost a decade. Towards the end of last year I invested in my first 7 string – an Ibanez GRG7221QA. I also play a Squier Dimension Bass and use the GetGoodDrums Invasion Kit for my programming.

At the moment I am promoting the latest single “Savages”, released 26th March 2021. It is the first single of the year but I’m planning on putting some more things together very soon.

The aim is to get a couple more singles out there, and maybe look into working on a first EP release. There’s a good backlog of ideas waiting to be brought to life.

My big aspiration would be to support TesseracT. They became my new favourite band during lockdown and I just think their sound is astonishing. I also take online vocal coaching from their singer Daniel Tompkins; he’s such a great coach and a phenomenal vocalist. I would get my Huddersfield band Individuator to open for me! We’ve not done anything in a while due to distance but it’s something we’d look to maybe revive in the future.

A chance to plug someone you’ve toured with, or a mate’s band we’ve not heard of before!