Rocking into April it’s our pleasure to feature some information about Alia Tempora, with our questions answered by wild front lady Markie! 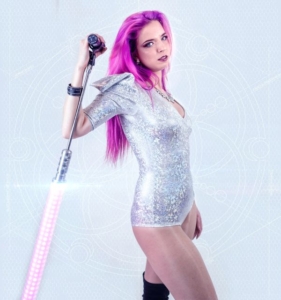 Hi! We are from the Czech Republic!

Basically, all of our musicians joined the band after being chosen at the audition, just me and Štěpán are founding members of the band and we have been friends before we started the band.

Our first concert was 8th of June 2012, that is the date we consider our beginning as a band even though we have been working on our songs for some time before.

When I think of it, our band name actually came from a Latin vocabulary! I tried to translate some of my ideas from English to Latin, because at that time we thought it is super cool (we were young, you know…) and then we choose Alia Tempora (“Other Times”) as the winner! But we like to say that Alia for us means unique / different / weird!

Fun fact that I never mentioned before, is that the second option was Synergia!

It is kinda hard to say since it’s very important for us to make unique music and we combine many genres together in our songs. We could basically name some bands we like from any genres and those would be probably our influences because I believe that “favourite bands” is exactly what influences every songwriter, even if it would be just subconscious!

We are hard to put into the genre box, which is sometimes kinda frustrating but at the same time it is what we want and love and we are having fun while people are trying to figure it out! :D We have a problem defining it ourselves, but I think that the closest “box” for us would be Electronic Dance Metal with pop influences. Or maybe house pop with metal influences? See? It is hard to say!

Yes! It is very important for us to always give something valuable to our fans through our lyrics, to motivate them, support them and let them know that they are not alone in their life. We want them to appreciate their uniqueness and individuality.

I don’t think that this theme will ever change in our music, because we feel like it is really needed in this World, to spread such messages of uniqueness and love towards each other.

Oh, you caught me off guard here – we never really counted it! But I would say a lot and not enough! We love touring and meeting our fans and our shows are usually showing our relationship with fans, so they are very wild, full of energy and love flowing from both sides!

Oh, I remember I licked the horn of a plushie unicorn I got on stage from a fan! And it is forever captured in the “Mockingjay” live video If you want to see that glorious moment!

That would be actually a perfect question for our guitarist and growler Štěpán, he is the one who is taking care of our gear and he is enjoying this topic a lot – he would love you for this question!

From my side of the ship, I am using Sennheiser mic and in-ear systems and I am endorsed by XAN Audio who recently made me amazing custom made IEMs so my ears aren’t virgins anymore…!

We have planned some kind of content or release for our fans for every month till the end of this year, but nothing is to be published yet. Few days ago we published our new music video Bark on Me though so I can say that something similar will come in next months again!

Hmmm, let me then just give a shoutout to some of our friends and let’s consider it 3 headliners lineup to make everyone shine! That is by the way very unique concept of the Quinphonic festival in Birmingham that we attended many times and we loved it!

If I can only mention 2 bands, I would say Erszebeth from Mexico and Xiphea from Germany, for all the years we are friends! Because I can’t help but saying: “It’s the time you spent on your rose that makes your rose so important…”

Thank you so much for having me and I hope to meet you someday!