Time for your daily dose of new stuff, this time sticking to home territory with a trip down to old London town… 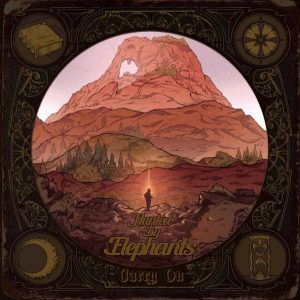 Two of us are from the U.K, Ray (bass) is from Ireland and Apostolos (vocals) is from Greece. We’re all based in and around London now.

We first met through band-finding platforms when Apostolos came over to London about 2 1/2 years ago. That was the start of the band and we were initially a three piece for our early gigs and recording. Alex, our drummer, joined the band 3 months ago – during lockdown we took the opportunity to find the drummer we really wanted and now we couldn’t be happier, as Alex completes the quartet.

We’ve been playing together more than 2 years now. In the beginning we spent a few months in the rehearsal studio to find our sound through writing original material, which later become our first album Rise of the Elephant. After the first album was released we focussed on gigging which took up the remainder of 2019 and early 2020.

We love telling the story! And we think it’s a funny one. Our first temporary rehearsal studio in London wouldn’t let us cancel a rehearsal we had booked – we had found a permanent solution so wanted to move to our new space. In the end we didn’t turn up for the booking and the studio called us a bunch of times leaving voicemails. We had a laugh listening to the voicemails and the guy was basically chasing us, so we said we were being “hunted by” him. Apostolos had always wanted to use a name with “Elephants”, so one evening after a load of beers in a Camden pub we just put two and two together and – in that state – thought it sounded great.

Definitely classic rock bands like Deep Purple, Led Zeppelin, Black Sabbath and other bands from the 70s and 80s. That’s not to say we don’t take inspiration from today’s bands – we have a great admiration for Rival Sons as they represent old school rock music today. We all listen to different styles of music; everything from 50s soul and jazz to today’s heavy metal. Funk, jazz, progressive rock and metal definitely influence our sound. We feel the combination of influences from each member gives us a unique sound and a special song writing ability.

Our music is heavily influenced by 70s rock, however we’ve all got different tastes in a big range of other musical directions which makes our song writing more unique. We’re, first of all, aiming to stay true to ourselves and keep “the feeling” in everything we play. It’s all about passion and we just want people to feel it too. We feel we’re moving quickly. We formed not long ago and we’ve now got two albums recorded and we’re planning to ramp up the shows!

Lyrically we draw inspiration mostly from personal experiences that come from relationships and the current state of the world. Some of the songs also have spiritual concepts and imagery, they are inspired by a “universal view” as well as a “world view”, if that makes sense!

Full of energy and raw rock feeling. We just to want every moment of the gig to be natural and come from playing the music and to connect with the audience on that level. We’re loud, but dynamic and melodic. So far, in the year or so we’ve played live, we’ve performed more than 30 gigs around the Greater London area. We’ve also played in Glasgow, Newcastle, Leeds, Manchester, Leicester, Plymouth and Chelmsford.

We played with a band who were really energetic on stage which was great to see. Unfortunately, the combination of beers and excitement resulted in a guitar head to-the-face and a split lip! Blood everywhere, but they took it really well and still put on a good show.

Generally for equipment we keep it pretty simple. We love vintage gear, but use our ears mainly for choosing what to play. For our recordings we used a 70s-style Ludwig kit. This is huge kit with a 26” kick for that real Zepesque boom. For gigs we’re now using a Mapex kit which Alex has put together. Roman (guitar) uses the classic combination of Les Paul and vintage Marshall, with some additional frills on the pedalboard, along with a Bogner amp that was used on the recording as well. Ray is a Fender guy with an Orange in the amp department, and as big a cabinet as possible!

We’ve got some big releases on the horizon. Our new single is going to bring Hunted By Elephants into the next era for the band, and give the world a taste of what’s coming in album two. The single is coming out shortly on 6th November along with a video so we’re pushing the message out there in preparation for the release.

We really hope, for everyone, that things will start to look up in the current situation. We’ve seen how resilient the music community is in these times and we know everyone is fighting on for that magical time when we can all enjoy live music, unrestricted again. The band are buzzing to get back on the road and play our new material in front of people. We’ve got our fingers crossed for this to happen ASAP. In the meantime we still have a lot of work to do on the aforementioned release, including shooting another music video that is in the early stages of production, so our focus is on this for now.

We’re big fans of The Last Internationale, we’ve met Delila and Edgey at a couple of shows – really great group, but never had the pleasure of sharing a stage with them. We would love to support them next time they’re over in the UK. Apostolos knows a band called Blues Pills, he’s gigged with them in the past. We really dig their vintage, bluesy sound and think we could make up a fantastic bill together, so would be great to support them again!

[…] Brit rockers, and recent Band of the Day, Hunted By Elephants launch themselves into 2021 armed with their stunning new album, Carry On, out […]