We’ve spoken to Pteroglyph a couple of times (2015 at Wildfire, and 2016 in the runup to Bloodstock) but never really sat down for The Big One. Plus their new album is out today so, you know, timely… 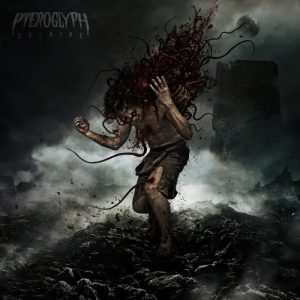 We are based in sunny (drizzly) Leeds! With band members hailing from the north east and the deep south of England.

Pteroglyph started as a one man bedroom project that slowly evolved into a full band production, we had all played with each other in variations of different metal bands but have all been friends for years. We just happen to be the right set of metal obsessed idiots to make it work! The best of the best!

This current incarnation has been playing together since roughly 2018. We’ve spent the last couple of years out on the road, playing to anyone that will have us. Honing in on our sound has been the objective before hitting the studio!

Modern technical metal with one foot in the old school.

Punishing and relentless tech metal riffs being played way faster than they should be. Like if Meshuggah and Gojira had a radioactive three-headed child. Our focus is on being neck snappingly tight and shovelling as much air as we can out of our instruments!

The current song themes are loosely based around the prevalent inequalities in modern society, whilst also coming from a post-apocalyptic point of reference.

Expect 40 minutes of expansive aggressive metal with full energy from the get-go. Drop in a dime of tightness and infectious groove laden head nodding.

Last year we played somewhere between 30 – 40 shows, including week-long tours of the UK.

Where to start…off the top of my head… a man once set his hand on fire in the middle of the pit, people crowd surfing through the actual ceiling, Ansley (guitar) jumped off a speaker cabinet and soiled himself and a man jumped off the top of our van and tried to grab a lamppost….he didn’t make it.

Bradie plays Tama drums with a selection of Sabian Cymbals

We’re currently plugging our new album ‘Solaire’ (released 6/11/2020), we have the title-track single already out and available on all streaming platforms. The second single ‘Black Death’ has also just been released.

What are your plans over the next 6 months or so?

Unfortunately, due to COVID chaos, any live gigs we had scheduled have been postponed/cancelled…but! we do have a gig booked for August 2021, fingers crossed it still goes ahead!

We’re working on putting together a high-quality full gig live stream but there’s no set date just yet.

We had been live streaming performances from our homes during lockdown and the plan is to get back to that for the time being, whilst also harassing everyone on the internet with the new release!

It’s got to be Meshuggah headlining, any chance to be near the same stage as them would be an honour….and watch ourselves get our arses entirely handed to us? It would be great!

We went on a tour last year with a London band called SlaveSteel, they were absolute dudes. Great band, great musicians, really professional and awesome to be around…also great to drink with!