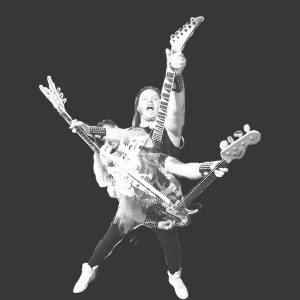 When did you start the band?

I officially started Night Fighter in 2019 but it’s a project I’ve been trying to get off the ground for a long time! There’s riffs on the Unholy Sepulchre album I’ve been sitting on for the best part of a decade, maybe longer!

I misheard a lyric in the Anti-Cimex song “Nailbiter” and just thought Night Fighter had a real punch to it, the original band names I was going to use were Sardonic Delight and Unholy Sepulchre but neither had the right vibe, the music is total 80s worship and I think the name also really helps cement that idea before anyone’s even heard a note.

My biggest influences for the Night Fighter stuff are Overkill, Sodom, Slayer, Destruction and Venom. Other things that creep in are my love for punk (especially the more metallic stuff like Anti Cimex, Broken Bones, mid-80s English Dogs etc) and more recent thrash and speed metal bands like Toxic Holocaust, Deathhammer and Vulture.

For Night Fighter I had a really specific vision that it had to sound like that point in the 80s where the subgenres hadn’t been clearly defined so everything is very focused but there’s still enough room to be creative with the writing process. With it being a solo project there’s also another part of that focus that I know exactly how I want things to sound and I can make sure that everything is precisely how I want it to sound in the recordings. The end result is a modern take on that mid-80s thrash/speed metal sound with hints of proto-death/black metal too which I think captures the best of both the old school and modern sounds!

The lyrics for the Night Fighter material are much more typical metal lyrics than I’ve written before, that kind of pantomime Satanism a la Venom with a good serving of cheese. I try to keep it at least grounded in some kind of reality though, like there was a number of years I really went off metal lyrics (see the Göatshit lyrics to “Steel Warriors” for a longer version of that rant!), but I was inspired by bands like Nuclear Assault and Gama Bomb to include a bit more weight to my metal songwriting, and also Dee Snider speaking in Congress about “Under the Blade” as a reminder that I can have as much depth to my lyrics as I want and still maintain that metal vibe… for example “Barbaric Cruelty” is about tiger poaching and there’s other messages in there for the listener to pick up on!

So, Night Fighter have only played 2 gigs. I’ve gigged a lot more with previous bands so I have that experience under my belt. With the nature of being a solo project though, I felt like I’d need to get a live band together because I couldn’t bare to have a dull live performance. I’ve seen one one-man band live before and not been impressed at all watching someone play rooted to the spot with his laptop – it was just the opposite of what live music means to me so I started re-evaluating what one person on a stage could be… why should it be worse? If anything there’s scope for it to be better, like I can guarantee that the drums and bass are going to be rock solid for a start and I’m able to put in cues for everything so as long as I’m well rehearsed with the backing track, I can keep it tight and energetic and retain some of the performance element. I will have a live band eventually but honestly I can’t say when that’ll happen. It seems slightly moot right now to me with the uncertainty of live music due to Covid-19 but once we have a solid idea about gigs being able to actually go ahead I’ll be much more focused on that idea!

I wouldn’t say I’ve done anything especially wild on stage, the first vocalist in my old black metal band, Assynt, ripped up and ate a Bible onstage which I honestly just thought was stupid. Wildest thing I’ve seen was my first time seeing Exhumed when I had no idea about their stage show, I was down at the front of the stage and no sooner had I thought to myself “why can I smell petrol?” a guy runs onstage with a chainsaw, not a surprise for people familiar with their stage show who know it’s just not got a chain on it but I did briefly fear for my life hahaha!

What gear do you use, guitars do you play etc.?

I use a Dean Razorback V with the signature Dimebag pickups and a Jackson King V with passive EMGs for guitar, I’ve got a project Dean V which might make an appearance too!

For bass I’ve been using a Squier p-bass which I’ve recently fallen back in love with, I’ve had substantially more expensive and more “metal” instruments but the 2 basses I’ve stuck with are my Kramer Striker bass and my Squier, which was actually my first instrument!

I also use Dunlop strings, Peavey and Line 6 amps and a Hartke Bass Attack preamp.

The main thing I’m promoting just now is the physical release of the debut album, Unholy Sepulchre, which is coming out on cassette through Narbentage Produktionen and CD and vinyl through Alone Records. I really can’t wait to see some physical copies. I did everything myself including the cover art so seeing that on a record sleeve will be a dream come true too!

I’m recording an EP at the moment which is actually being included on the CD and vinyl releases of Unholy Sepulchre and a possible cassette release too. Other than that hopefully some more gigs before the year is out and maybe finding some more musicians for a live band!

I’d feel a bit weird billing myself above anyone else, even hypothetically, so just assuming they had to play earlier for some reason I’d put Venomwolf on first and Deathhammer headlining, preferably somewhere tiny and dingy! I feel like that would be great to play or attend and just a whole lot of fun all round!