Having recently released their brand new album A New Age Of Insanity, Rejection are here to tell us all about themselves…

We are from Corinth, Greece.

The guitarist and drummer know each other from high school. Playing gigs in the scene is how the rest met up really.

So the current lineup is a year old, relatively fresh, but the band has been around since 2007. 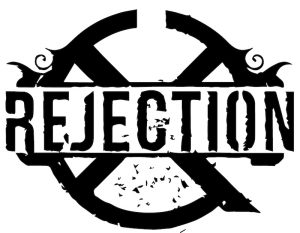 It is an English word that means either the dismissing or refusal of a proposal, idea, etc or the action of spurning a person’s affection. I am not at liberty of discussing further details on the matter though.

Our influences would be modern groove metal.

Straight to the gut grooves, big riffs and in-your-face vocals.

We do dwell on the interaction of person and society. On our latest album more about technology and how dependent we are, but also technophobia and technophilia.

We have a very aggressive vibe on stage, loud and dirty. Now that, I can’t answer but it’s a bunch. We’ve done a Greek tour a bunch of times and a European once. Hopefully this year will be another one.

Seen chainsaws on stage. Our singer almost got burned by the pyro on a festival (he didn’t know they were there), proceeded to crowdsurf, fought for the mic and returned to the stage as the pyrotechnics went up again.

We are experimenting with our sound with the latest album in order to output the best possible live quality. We use 6505 amps and ESP guitars. Sonor drums and Darkglass electronics for the bass sound. We are currently not endorsed by any of these companies.

We are promoting our latest album titled A New Age Of Insanity. Take a listen on your streaming platforms.

A European tour, some festivals and a possible second leg for our Greek tour.

Supporting Metallica would be awesome I guess. As for the band that would be supporting us, I don’t know, there’s a lot of awesome bands in the Greek metal scene…very tough to choose.