All the way from Austria with its kangaroos, wild desert camels and didgeridoos… wait, what? 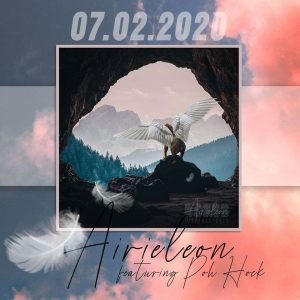 I am from Carinthia / Austria – but actually I was born in Slovenia. I immigrated without anyone noticing 😉

How long have you been playing as a solo act?

It just resonated with me – also it fits my concept really good – so I can tell the story of life until the last cell fades away.

I listen to a lot of prog metal like David Maxim Micic, Plini, and so on but also Jacob Collier, a little bit of Hip Hop (specially lofi stuff – I love that!).

I don’t write in the sense of – “ok now a verse, then a chorus” – I try to tell a story with my songs and just like in real life stuff happens that you don’t expect. In some songs I don’t repeat any parts because stories sometimes are just like that. When you listen to my songs you will have the feeling that you just went through a journey, I guess.

Since I play instrumental music – not really-

We played around 10 gigs for now – I love the vibe on the stage. With my two boys Flo and Robin I have the best live team I could ask for. It’s so natural and so much fun, the audience feels that. On every single gig we were told that you can see how much fun we have on the stage – and it’s totally true!

We played at a location and since the music is not “brutal” metal – there are basically no moshpits or walls of death – but 2 guys really didn’t get the overall vibe and they tried to mosh but people got so annoyed so a little fight started.

My newest single “Airieleon” came out on the 7th February – go check it out! Also new music is about to be released preeeetty soon.

We would like to play more festivals and big gigs. I want to get this project to the next level. Also I will release the third EP – and I am already writing the fourth so lots of new music!

We just love to play with Their Dogs Were Astronauts – they are good friends of us and they take this as serious as we do. The second band would be Tesseract. Now that would be sick right?