Into the Unknown are here to make themselves… known. 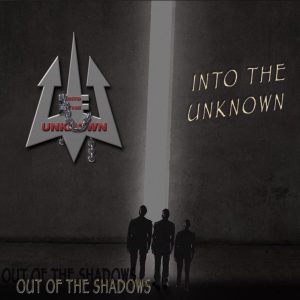 We are actually quite spread out, two of us are from South Bucks, one from Woking and the new guys are from Milton Keynes and Marlow.  Our studio is based in South Bucks, so it’s probably fair to say that.

The three of us met in the studio. Rupert was producing a song for a pop singer, and Ryan came in to do a guitar session. The two immediately hit it off and Rupert asked Ryan if he fancied recording a rock version of Chris De Burgh’s “Don’t Pay The Ferryman”, as it was a song he’d always liked to try doing. When it came time to put vocals on, Ryan suggested Lucie as she was the singer in his band at the time. The chemistry between the three of us was obvious so we started recording more, and realised that we had half an album done, so we decided to form Into The Unknown.

We did the first recording in 2016 I think. May have been a bit earlier than that.

Based on the fact that the band came about without a definitive plan to form, and the fact that all the songs are a bit diverse, it just seemed appropriate that we were moving forward into the unknown, with no idea where we would end or what we were trying to achieve!

Again, very varied… Rupert likes a bit of symphonic rock, mixed with 80s rock, Ryan is big time in the classics such as AC/DC and Guns n’ Roses and Lucie likes pop and musicals… Although, to be fair, since working with the guys her tastes have expanded into rock!

When seeing this question, Lucie went all coy… but to be fair she does have a recognisable voice, she sings with an accent (being from the Czech Republic) which is a bit unusual. That coupled with the strings and orchestration that we sometimes use, it tempers the hard edged guitars, bass and drums in most hard rock bands. And Rupert plays fretless bass.

Not especially, Lucie likes to try and keep it to upbeat, life experience lyrics, but then we’ll go along and write a song about monsters, or do our own re-imagining of Milton’s Paradise Lost!

As a three piece for so long, we really haven’t had the opportunity to do many shows, especially full rock shows, so all we’ve done is the occasional acoustic show. That said, the debut live show was in front of 2000 people.

Do you mean our show or someone else’s? Our show, it would probably amount to overdoing jello shots. Someone else’s show – I don’t think we should go into detail! Rupert has toured with a lot of classic rock bands, mostly as tour manager, and you know what they say: what happens on tour, stays on tour!

Glad that you asked that question, as Rupert and Ryan both play guitars that they hand built themselves, and are very proud of. Rupert originally built a headless fretless bass, as he couldn’t find one that he liked on the market, and loved the experience. So then they both decided to build one, Rupert’s being a 6 string fretless bass (which is used on the majority of the second album and the covers EP), and Ryan built a nice guitar that he alternates with his large collection of guitars, but it is his go to guitar in the studio for lead solos.

2019 is hopefully going to be busy. We have finished album number two so we are just planning the release for later in the year and we are just about to announce two new members, a new guitarist and a new drummer, so we will be hitting the road for some full on shows. We are also still looking for a keyboard player to join us on the road, so if anyone’s interested – get in contact via the Facebook page.

We would all love to open for someone like Nightwish or Within Temptation, as for someone opening for us, that’s quite a hard question… maybe G n’ R.