We’re no strangers to Gasoline Outlaws so it’s only right they finally got our Band of the Day treatment. 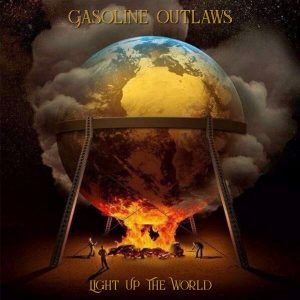 Matt and Chris are brothers and they’ve known Ryan for many years through the local music scene. Adam joined through an online advert for another band that Chris was in. When Matt came back from travelling to Australia, we all started the band.

One of the hardest things about being in a band is coming up with a name. We had the songs and the name came after. Matt was listening to the Audioslave song “Gasoline” and then just paired it up with the word Outlaws because it sounded quite cool!

Our music is riff driven with lots of groove. But we also like to strip it back and have acoustic tracks too. I think this broad range of styles keeps it interesting for both us and the listener. And Matt has a very distinct voice which always ties it to a Gasoline Outlaws track.

Matt writes the bulk of the lyrics. And he draws on personal experiences and local history for a lot of the songs.

Our live shows are great fun. Lots of audience interaction and we pride ourselves on being as tight and well drilled as possible. We haven’t played as many shows as we would’ve liked. Living over here in Northern Ireland, you’re limited to how many times you can play as the local scene is so small. But we try and get over to the mainland as much as possible.

We’re quite a reserved bunch, but a couple of years ago we went to Slane Castle to watch Guns N’ Roses. The weather was atrocious so we lit the BBQ in the back of the car. And then realised we had no cutlery so used tent pegs to cook the stuff. Rock and roll, right?

What are you plugging/promoting at the moment?

We have a brand new album out 10th May called Light Up the World. It’s our second album done through a successful Pledge campaign. We had a nightmare when Pledge ran into problems but we have overcome those now.

We want to promote our new album and hopefully play in front of a lot more people. We did two Planet Rock festivals last year which were amazing, so more festivals would definitely be a goal.

We would love to support Those Damn Crows. We have played on festival bills with them before but not a stand alone show. They are great fellas and a superb up and coming band. And to open, Broken Witt Rebels (although they should probably co-headline). We discovered these guys at Wildfire Festival a couple of years ago and they blew us away. Great band with a very promising future.