A short but sweet one for your enjoyment today. 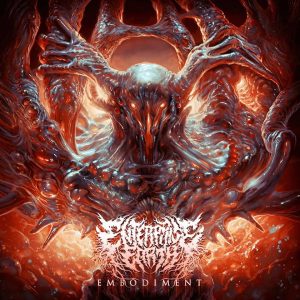 We all live in different parts of the States. Dan lives in Indianapolis, Aaron and Rob in Seattle, BJ is from Spokane, and Gabe is a nomad without a static residence. We like to say we’re from the USA.

Internet! BJ and Dan were linked together a while back. Gabe was Facebook friends with them as well. Aaron and Rob were linked through mutual friends in the scene.

Dan came up with it after researching the Illuminati and other conspiracy theories.

Way too much to list but if we had to pick: Lamb of God, Necrophagist, Whitechapel, Between The Buried and Me, Killswitch Engage and many more.

Unrelenting aggression seared with raw emotion. We write from the heart and try to incorporate outside elements into our death metal sound.

Luciferous is primarily introspective. It’s about addressing one’s demons and rising above the shadows of the past.

We try to bring as much energy as possible to our live show while offering a very tight performance. Too many shows to count!

We saw someone get their teeth knocked out a sold out show in Nashville the other day.

Our brand new album Luciferous just released. We’re on the road for 3 months in support of the new record.

Touring as much as possible and promoting the new record.

We’d love to open for Gojira. For support I’d have to say our good friends in Aethere.

From previous Band of the Day Empire Warning: if a Norse God had to take over from one band member what God will it be, what position would they be filling?

From another BotD, The Crawling: being in a band can be as much of curse as a source of enjoyment and satisfaction. What keeps you going when things get tough?

Thankfully we have a solid team and we support each other when things get rough.

And from King Bison (UK): If you could join any band on stage for one song, who would it be and what track would you play?

Either Lamb of God – “Now You’ve Got Something To Die For” or Gojira – “Backbone”.