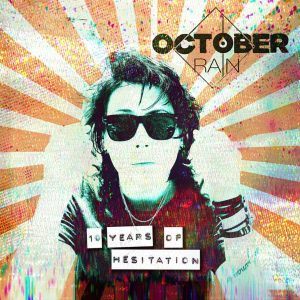 I’m solo… On the EP 10 Years Of Hesitation my friend Tarah plays drums. On stage, I will be surrounded by musicians… then I think that maybe a team will be created and this solo project will change to something else, but it’s too soon to tell.

This project was born probably 10 years ago in my head, but it started to really live less than a year ago.

Well, I didn’t want to play under my name because maybe one day it won’t be just me. I was recording demos and probably because it was raining; I was pretty creative, rain always brings me to a certain mood where I’m more creative… we were in October… I needed a name quickly… ta-dah! October Rain!

Life, feeling, people and music. For this EP, I have listened a lot of Queens of the Stone Age, Foo Fighters, Radiohead, MewithoutYou, PJ Harvey, Tool, The Hives…

Now that I’m alone I can write about absolutely anything I want… so no, no articular lyrical themes. Total freedom!

I’m working with my friend Bertille on the live show. She is an amazing light engineer, with a lot of ideas to create a unique atmosphere on stage. It’s gonna be great! I’m really excited. Shows are going to be announced soon, stay tuned.

Years ago, when I was singer in a band we were playing for a biker’s party and I saw, just in front of me, a couple fucking! Right in front of the stage/me while we were playing! They were so drunk! So maybe they were just trying to fuck… but, hey! Come on, it’s the same!

I play a Fender Telecaster (Modern Player) on a Blackstar HT club 40… and some fuzz, OD, reverb pedals.

The EP just released. A second clip is coming, and I’m rehearsing for the upcoming shows. I’m also writing new songs… the big stuff will happen in 2019.

Well, Foo Fighters… if it’s happening in the US, the band Tarah Who? and if it’s in France/Europe the band Dry Can but you probably already know those bands.