Snew are a genuinely new band to us, so we’re excited to feature them as Band of the Day. We read on along with you to find out more about them in their own words… 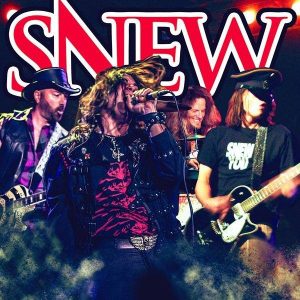 Curtis Don Vito, lead singer: Andy and I met through a mutual friend. We met over at Andy’s place in Hollywood. We immediately started writing songs and knew we were a perfect musical match. We wrote the song “Stand Up High” that night, which is the first track on our first album Snew You. A few days later we named the band.

CD: There’s some debate about this but since I was there I can tell you. No one actually came up with the name Snew. On that first night Andy and I met he gave me a CD with some song ideas on it. He got out a Sharpie and wrote a big letter “S” then he paused for a moment moved his pen over a couple of inches and wrote the word “New”.

I took that CD home and after looking at it over and over I couldn’t help but put the “S” and the “New” together. Next time I saw him I asked what the “S” stood for. He said he was going to write the words ‘song ideas’ but thought that would be out of order so he just wrote “new” instead. I told him when you put it all together it says “Snew” and I think that should be the name of the band. He said sure. So even before we had the rest of the band members we had the name of the band. No band in history has ever had an easier time naming their band.

Mark Ohrenberger, drums: Snew are the illegitimate stepchildren of Alice Cooper and the Ramones home schooled by Motorhead. That about covers it.

CD: Snew music will open up the cerebral cortex in your brain to lodge guitar riffs and catchy vocal hooks that will play over and over in your head for days. This is an actual phenomenon we hear from people all the time. You have been warned.

CD: Be who you are. Do what you want. Challenge authority because when it comes to your life, there’s only one authority you can believe in – you. Have fun. Give everybody a chance. Risk it all. No fear. Be weird.

CD: We play rock and roll. Doesn’t matter to us what’s in vogue or trending or whatever. We get together and it sweats out of every orifice. Doesn’t matter if we are in front of 12 people or 12,000 every ounce of energy we have just pours out of us. We can’t help it. After more than a dozen years of playing live we couldn’t possible tell you how many shows we’ve played. Lots.

CD: I can’t tell you how many times we’ve watch an entire crowd sing along to our song “Snew You” when not a single person there had ever heard it before in their lives. And I mean from the very first chorus. It was both freaky and fucking awesome.

CD: Andy plays mostly Gretsch guitars, Lenny plays Les Paul’s and Fenders. Both use vintage Marshall amps. Our drummer Mark has the largest collection of vintage drums I’ve ever seen. His hobby is finding old beat to shit drums and restoring them so they look like new. It’s amazing.

AL: Our fourth album is about to be released. It’s titled You’ve Got Some Nerve. It comes out September 17th.

MO: After we release the new album we’ll be heading to the UK for a string of dates culminating with our appearance at this year’s Hard Rock Hell Festival November 9th. After that we’ll head back to the States and the Snewing will continue.

CD: We have always wanted to open for Motorhead. We know that’s not possible anymore but if we could make our dreams come true it’s still Motorhead. If we could get some mates to open the show it’d have to be our good friends Little Caesar. Love those guys.

CD: Taylor Momsen, Joan Jett, any TV talent show that pits musicians against one another for prizes.

From another BotD, Vanity: If you could go back in time and tell your younger self one thing, what would it be?

And from Charly&Faust: What’s your underwear colour?