Continuing our ongoing mission to bring you many bands, national and international, today we have Scarleth all the way from Ukraine… 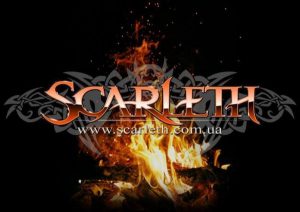 Hello. We are Scarleth from Ukraine, we are a female-fronted melodic/modern metal band. Happy to talk to you!

The band was formed in 2005 by myself (Victor Morozov). The first line-up included both of my sisters (Renata – vocals, Nina – keyboards).

After that, numerous line-up changes took place until the current line-up finally appeared:

The band was originally formed in Donetsk, Ukraine.

The current line-up of Scarleth has been around for about 2 years now. We are really happy as a whole.

Scarleth was just a cool simple name which came to my sister’s mind. I only added “h” to the end of the word, so it looks more “metal”. We also like this name because it doesn’t limit our musical style in any way. We can play anything we want under this title.

As a teenager, I was impressed by such bands as Deep Purple and Black Sabbath, so I wanted to form my own band. Ritchie Blackmore was my hero, he is the reason I picked up guitar to play. As for bands who had an impact on us I can say – Within Temptation, Black Sabbath, Amaranthe.

Our music is melodic metal with female vocals and unparalleled diversity. I think the most intriguing thing about our songs is diversity. You can listen to one track and think that we are a folk-metal band. But the next track could be doom-oriented, and another one can give you some cool and complex prog-like feeling. We really like to include many elements in our songs.

The lyrics of our songs are diverse as is the music. You can find quite interesting stuff besides just regular “love songs” or “freedom songs”. I think I should avoid spoilers, so it will be more interesting for you to listen to the songs yourselves!

Our live shows are all about drive, energy and sharing emotions with our fans. We work hard as a band to make our live shows as great as possible. As of now, we’ve played about 250 shows in total – that includes club performances as well as live open-air shows.

I think Rammstein shows are among the wildest I’ve seen, including all those decorations and fire-show. That is extraordinary. I don’t think any other band ever comes close to what those guys are doing on stage…

For guitars, there are Fender Strats and Caparison guitars. I also use AXE-FX 2 as my main sound generating unit. Mics are usually Shure Beta 58A when we are on stage. Keyboards are KORG, Kross in particular. Our bass player’s bass is Dean Edge 5 Czech, a really cool are rare instrument. Drum kits are different from show to show, but our drummer prefers Meinl cymbals.

We plan to release a single and promo video this year. Also, recording of the new CD is in the plans for this year. In 2019 we want to release the new album to tour to support it.

Then we will promote the album and perform at major open-air festivals in Europe. We still need to grow our fan-base, so please subscribe to our social media, you can find links below this interview.

We’ve played several shows with our friends, Azathoth Circle. The name is one of the names which came to my mind when I get questions like this one.

As for who to support, I think Within Temptation or Amaranthe would be great! I’ve been to their shows and talked to them after – they seem to be really nice people, it would be cool to support them.

[…] modern melodic metallers, and former Band of the Day, Scarleth have unveiled a new video for “Be What You Are” taken from their latest full […]