Begat the Nephilim are genre-defying but heavy as a heavy thing. That’s all we’ll tell you – the band can do the rest themselves… 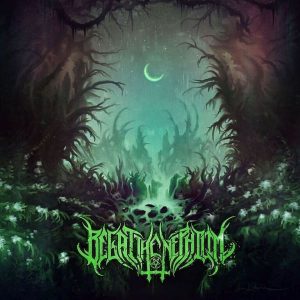 Tyler and Josh used to be in a band called A Record of Hate back around 2011. After that broke up, they were both looking for projects but wanted to try to stay together. One day, Cam messaged Josh on Facebook saying he had heard their old band and wanted to jam. He played through his early ideas for the album and it was exactly what Josh had been looking for, so after playing hard to get for a little while he was all-in as long as Tyler joined too. One of our previous rhythm guitarists, Andy, introduced the band to Brendan, who had played bass in a couple of Andy’s prior bands back down in NJ. Brendan came up to visit, jumped on the band’s first tour without really knowing any of us besides Andy at the time, then moved up to join us permanently.

It’s been a little under 6 years. It first came together around August of 2012.

Believe it or not, we don’t get asked where it comes from all too often, usually it’s just “how the hell do you say that?” Long story as short as possible: in the Bible, the nephilim were the progeny of angels that mated with mortals, which grew to enormous size and wreaked havoc. They were representative of the growing wickedness of mankind and were wiped out by the Great Flood. Essentially “Begat the Nephilim” is about how the great horrors of the world are created by ourselves; our wickedness begets our demise.

We all have our own independent influences, but the main influences for the band would likely be The Black Dahlia Murder, Cattle Decapitation, Behemoth, Between The Buried And Me, Wretched, Naglfar, and so forth. None of the parts are written to emulate the stylings of anybody in particular, but it’s hard not to think about bands like Wretched or TBDM when making the stank-face to some sweet pedal riffs, Behemoth during huge, grim tremolo parts, etc.

It’s definitely not for us to say what makes us necessarily “unique” since we’re not trying to do anything necessarily avant-garde, but we do try to paint a picture using a very diverse palette. We don’t get too caught up with making any one song necessarily black metal, death metal, progressive, or whatever, nor do we try to shoehorn too much into a song to make it diverse just for the sake of being diverse. We just love really extreme, dark, pissed off music of all different flavors and try to channel that into something cohesive, consistent, and hard-hitting. It’s elements that a lot of people love separately, love combined, or just hate altogether. The concepts might not be entirely unique, but we certainly hope our execution makes us hard to define.

The album follows a storyline centered around an ancient, looming evil referred to as the Mother of Blasphemy and and impending apocalypse. Certain songs, like “Cardboard Casket” shift the perspective to individual crises and the internal hell some people struggle with, but all within the context of the story’s unfurling prophecy.

Our live show has run the gamut over the years as we’ve developed. We’ve had ego boxes with pressure-switch activated strobes, destroyed our gear, bloodied each other up, all the fun stuff small venue owners or traditionally non-metal promoters hate. It all changes depending on the size of the stage, the type of show, the crowd, etc. but no matter what we always try to be energetic. Tyler’s torn his meniscus diving into the pit during our set, he and Cam both have had their heads split by headstocks, we had a bunch of people rush the stage during a Summer Slaughter set, but that’s not to say we ever try to put anybody in danger (please book us, promoters, we won’t destroy your venue). At this point we’ve played a little under 200 shows, somewhere between 175-200.

Summer Slaughter in Worcester, MA a couple years ago. That’s when the stage got rushed during our last song. At least 20 people jumped on stage and started going crazy. We also threw a free show in a barn at Brendan’s place once, where we crammed 60-75 people into this tiny, old barn, and some kid ripped his knee open so bad you could see his kneecap. Dude got a ride to the hospital, got stitched up, then came back to the show and partied with us nearly until dawn, what a legend he was.

Our debut album (Begat I: The Surreptitious Prophecy) coming out worldwide June 15th on Unholy Anarchy Records. Recorded, mixed, and mastered by Anthony Lusk-Simone over at Zenbeast Audio. We’re extremely excited about this, since the album has been in the works for years and has been recorded, scrapped, and re-recorded multiple times as we went through lineup, equipment, and studio changes. We love how this album turned out and can’t wait to get out there and push the hell out of it this summer!

Get this album out and hopefully tour as much as possible for it. The writing for our second album is already nearing completion, so any down time will be spent polishing and preparing for our next stint in the studio.

For local we’d go with virtually any two out our four favorites: Conforza, The Summoned, Pathogenic, and My Missing Half. We’ve shared countless stages with these bands over the past 4+ years and they’re all aggravatingly good. Non-locally, we did a leg of Enfold Darkness and Invoking the Abstract’s tour in 2017 and would love to hit the road with those boys again. This could be a long list so we’re just going to shut up now haha!

From previous Band of the Day Pale People: What’s the longest you’ve gone without speaking to another band member on a road trip?

Oh man, ooph. We used to get into a lot of real heated arguments that would last for days on the road. The actual “silent treatment” never lasted long because none of us are good with our emotions, so we would wind up exploding long before the silence could really be considered a “treatment” haha. If you count only communicating through expletives and rolled eyes, then we’ve definitely gone a full 10-day tour of at least two people not talking to each other.

From another BotD, Westmoor: Out of all the things you could have chosen to do, why do you play music?

Some of us, Josh and Brendan namely, grew up around a bunch of musicians in our families, so music was always an integral part of any given day or activity growing up. In general, we all only find real release through music. We’re pretty much all college dropouts and none of us have careers or rich parents, so we’re too stupid and too poor to think of anything better to do. We do, however, have instruments, hearing damage, and a lot of emotional baggage, so loud music is pretty much all we have. This is also a way easier method of making friends than… however non-musicians make friends.

And from Volka: Would you rather have legs for arms or arms for legs?

Arms for legs could make for some badass blast beats or guitar work that would make Michael Angelo Batio blush, but have you ever considered how much crazier fighting would be with legs for arms? You’re talking about nearly two extra feet (no pun intended) of wingspan, if you do an old school Incredible Hulk style super-clap, you’re busting somebody’s head like a melon. You ever see Undercover Brother? There’s a scene where Neil Patrick Harris screams “I am not a sissy” and claps a dude’s brains out his ears, that’s the type of power leg-arms would provide.