Very often here at Moshville Times, we get contacted by bands informing us that they have released an album and would like us to help spread the word. Moshville Times has been around for a number of years now but what still amazes us is that metal lives and thrives in places that we do not expect it to. This happened recently when a death metal band called Maysaloon from Syria contacted us and this was something that I had to get involved in.

What I did not expect was that there is a thriving scene in Syria, festivals with many bands playing together in venues. To triumph in such adversity should earn respect from each and every one of you, and I would urge you all to give Maysaloon a chance. They add something different to the overall saturated death metal scene and with this interview they inform us of their local scene, their struggles to play live after being accused as being evil and Satanists, and their lyrical themes of war, destruction and Middle Eastern mythology.

Frontman Jake Shuker took the time to answer our questions. 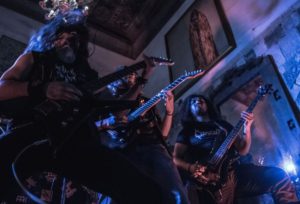 What does the band name Maysaloon mean?

Our name “Maysaloon” was taken from a hill in Syria called Masyaloon. There is a story of an old battle that happened in that area, Yousef Al Azma faced the French invasion led by Goro. Yousef fought by glory knowing he would die for he was outnumbered. It’s really inspiring how we think about this as it’s a glorious death,  so it’s about how symbolic it goes for us, how original we want it to be.

Can you tell us Moshville Times readers how you got the band together and give a history of the band?

Maysaloon was formed by Jake Shuker after playing a live gig in Damascus at Brutal Throne. We covered many bands such as: Death, Dissection, Obituary, Arch Enemy, Dimmu Borgir, Slayer and few more and after the gig, Jake and the bassist Dio Al-Miqdad decided to make their own music. After writing few songs, Yousef Yaziji (guitarist) joined Maysaloon, then we finished our first LP entitled The Forgotten Dawn which was released in April 2017. Around then Rami Ebrahim joined Maysaloon as a drummer.

We have a lot of influences, but it’s enough to mention that Chuck Schuldiner is our icon, the Godfather of death metal.

Our music is sharp, brutal and straight and enhanced by melodies from the depths of the orient.  “Oriental death metal” as we use old Oriental Instruments, this gives us an advantage against other bands. We wouldn’t say we’re “unique”, we’re just Maysaloon.

How often is the band able to get together and rehearse and what are the facilities in Syria like for studios and recording?

We are able to gather in our city. We all live in the same area but the bad part is that war has consumed us at all levels, there is no support for metal music here at all. There are no studios or labels and our songs are recorded in Jake’s room on his computer, mixed and mastered by ourselves. It’s really bad but this is what we are! It’s a challenge but we accept this.

What kit does the band have, guitars do you use, etc?

About the equipment, it’s not that good yet not that bad. After the war started we couldn’t get that professional stuff, because it’s really expensive. Let’s just say it’s a standard kit.

We do have particular themes where we often cover the “Fertile Crescent” area old civilizations, which are the oldest in history (Mesopotamia, Assyria, etc.). We also talk about wars as it’s obvious how war affects us. It’s a brutal environment we live in, gore, crimes and blood.

How was the response to your debut album The Forgotten Dawn from your local and the worldwide scenes?

The response was really unexpected, as we released and people here got crazy because nobody expected that our music was going to hit. We even got a response from around the world. Many magazines, reviews, webzines, articles and more! This year, which is our first year as a band, we earned four trophies:

How easy or difficult is it to play live and what are the venues like in Syria for gigs?

Well, it’s more than difficult in the capital, Damascus. There is only one place to play, in an art gallery called Gallery Mustafa Ali.  The rest won’t let us play because they think we’re evil and Satanists but we are still managing to play a lot of gigs in that place.

How many gigs have you played and is there a following in Syria for extreme music?

We played many gigs to refresh the scene in 2017 as we started a tribute to doom metal by playing an event called Ceremony of Doom II. There was an old version in 2013 played by one of the best Syrian metal icons, Fadi Massamiri. We played it again in another city, Lattakia City, then we played rock tribute Rock of Ages. Then we played our LP The Forgotten Dawn release concert at Brutal Throne II which was the most recent and, yes, the whole world would think of Syria as not being a place for metal but we have enough metalheads here.

How has your debut album The Forgotten Dawn gone down on the live environment?

It was a great experience for us because we did all the recording, mixing, and mastering all by ourselves and I think that the most important thing was that the audience loved it and are supporting us.

I have to ask what the local scene is like in Damascus and is there a close friendship between the bands? Who should we also look out for?

Let’s say it’s becoming good and in 2018 there are many bands that will drop original music, such as, Absentation, Step to Eternity, Monosoul, Haunted Cellar and another few projects. Not all bands here have a good friendship with each other but we as Maysaloon, one of our goals is to unite our scene to become stronger. You should look for Haunted Cellar (Lattakia) and Absentation (Damascus) those two are making a huge progress to our scene!

So what can our readers and metal fans worldwide expect next from Maysaloon?

Well we’re working on a new release this year with a full length album consisting of 12 tracks. We are going to play more shows and maybe outside Syria (Lebanon, Jordan, etc.).

I want to thank each person who has interest in our scene, and I want to thank Moshville Times for this opportunity. We hope to gain your support as we really need it! “Metal Unites Us”.