So… who are Statues? And what sort of music do they make? Where are they from? When can you see them? Hey, don’t look at me. If I told you the answers, there’d be no point in reading the answers to all those questions (and more) that we posed them… 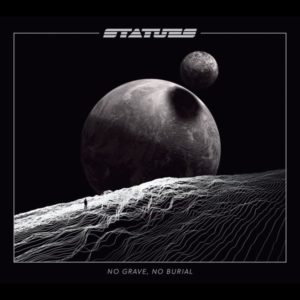 Perth, Western Australia – The most isolated city on Earth, but also one of the most beautiful, in my completely unbiased opinion.

I knew Matt (bass) from high school, and everyone else through various bands around town that we played with over the years.

We started around November of 2009, and got straight into playing shows in 2010. Wild to think it’s been that long already.

An architecture book. The band name wasn’t meant to be ironic, I promise.

Rage Against the Machine, The Chariot, Architects, SikTh, and anything with delay pedals on it.

A contrast of huge riffs with progressive and post-rock elements. It’s our blend of musical styles that make for a unique experience.

No Grave, No Burial is a concept album based around a citizen fleeing a war with his family, only to experience deep loss and other turmoil.

Our live show has been recognised as one of the most energetic and insane shows in the country. I’d guess we’ve played hundreds of shows by now, but it’s hard to know.

I did a guitar flip and cracked the back of my head open, two songs into a set. I didn’t feel concussed so I finished the set, bleeding on everything. Turned out I needed four staples in my skull to clear that wound up.

I’m using an Ibanez RG1451 which is a super straight-forward guitar, but plays like a dream. It’s also light which is fantastic for thrashing.

We’ll be on tour around Australia, celebrating the release of our second album, No Grave, No Burial, in January of 2018 with Sydney mates, Arteries.

We just want to play anywhere we can. Hopefully as much Australian touring as we can muster and perhaps even an overseas trip too.