The Bleeding have a new album, Rites of Absolution, out on May 19th and offered us a track from it to stream for your ear-destroying pleasure. Because we’re greedy, we demanded more information about the band in exchange. Guitarist Tasos kindly agreed to lend his flying fingers to the keyboard… and offered us an exclusive new track from the album to stream. Scroll down past the words part to listen. 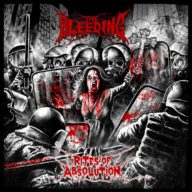 We knew each other through friends and band acquaintances.

The band’s original inception was in 2010; the current lineup has been around for about 2 years. It started off as a studio project but it gradually developed into a fully fledged gigging band. The Bleeding has gone through some shifts and changes in its arrangement over the last 7 years. This has been an organic process that has led to its growth and evolution musically.

It’s a way of death. Tasos and Themis K (the original singer) came up with the name, looking for something memorable and brutal.

Musically we are influenced by bands like Death, Slayer, Pestilence, Megadeth, Dissection and Carcass.

It’s old school death thrash metal. Naturally the music evolution has also been taken into account in the creative process. We feel that we use the melodic element in a way that adds tension to the music, instead of mellowing things down. We drop hints of melody in the midst of a thrash storm to construct emotional phrases and bridges.

Taken at face value Rites Of Absolution has a theme and motif of death, savagery and destruction running through its core. At a deeper level however, it attempts to critique humanity and its belief systems. Fighting inner demons and the demons constructed in society itself. Their personifications in Ancient Egypt and the governmental systems and religious trappings that mould and structure people’s views in often bloody and brutal ways.

Our live show is back to basics rock and roll. No samples, no triggers, just four guys playing hellish metal and having a good time.

When the new lineup was put together, we felt that we needed strong new material before we played any more shows. The band has been in the  studio for 2 years, rehearsing, writing and recording. We’ve done four gigs since the announcement of the new album. More shows to come!

Nothing too crazy to report yet, but what’s funny is that at a recent gig we were playing “Death Eternal” and Tasos got somehow got thrown off the beat; he played the next couple of measures as open note drones until he fell back into it, but we liked that change so much, we’ve been playing the song this way since!

Hoping for a great release of the new album, Rites of Absolution, on May 19th. We’ve worked hard for it and we hope people will enjoy it. Of course play as many shows as we can, to support the release and start writing new material.

It would be awesome to open for Carcass! Infected Dead are really cool guys and we’d love to play with them again.