Time for our Band of the Day moment! Today we treat ourselves to The Spitfires, the four piece metal band from London. 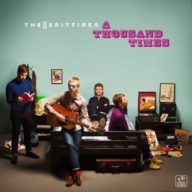 Their first few singles cracked with an energy of seeds being sown but their debut album Response in 2015 blew everything around out of the water. Rarely has a band sounded as ambitious, confident and of the moment. Singer and guitarist Billy Sullivan’s sharp socially conscious lyrics and finely observed storytelling are backed by a guitar-driven fury and an exemplary rhythm section which set solid foundations and structures.

Bassist Sam Long and drummer Matt Johnson don’t just make up the numbers in the band. They are both integral to its style and vision and Response sounded like fires burning brightly for the last gang in town.

A year after Response and the Londoners Bring us “Move On” with an exciting keyboard mix and the discovery of even newer sounds and many hopes for their future. “Move On” is due for release on May 19th.

Here are their upcoming shows for the year:

View all posts by Mel