We Came From Wolves just released their new single “Places Unfamiliar” which you can check out below. But what else is there to know about this crowd? What better way to find out than to chuck our Band of the Day questions at them! Singer and guitarist Kyle took on the responsibility of answering on behalf of his bandmates…

The origins of the band are in our hometown of Perth, Scotland, however currently we are spread all over bonnie Scotland, I (Kyle, Singer/Guitar) live in Glasgow, Bassist Rob lives in Perth, Lead Guitarist Michael lives in Edinburgh and our Drummer Andy lives in Dundee! 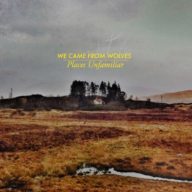 I had met both Rob & Andy through the local scene, years ago, they didn’t know each other, but I mixed in a few circles and those guys were top players within their respected genres, we met Michael just over a year ago when auditioning for a new Lead Guitarist.

Since 2009 in some sense, although the members changed frequently and it was really just a band practice for me to formulate my solo work into full band performances and arrangements…however we started gigging properly in 2011.

A spin on the Romulus and Remus story from Roman mythology.

It’s not for me to say what makes us unique, music is taste, to some people we could be the cats pyjamas…others won’t get it…but what I can say hand on heart is that I write from mine, I tell truths, I sing insecurities and fears, I play every show like it’s my last and it means the absolute world to have people who relate to it all and sing back and somehow appreciate us doing this…I’ll never try to fit into a template or try to subscribe to the hip or cool paint-by-numbers trash that a lot of this industry does…it may go against us, but we’re not posers…we are here for the music and the feelings it evokes.

I write what I know…it could be observational, or self-surveying…I write truths and I gain solace in the fact that by facing and expressing hard times through lyrics and chords that I can put a lot of demons and insecurities to rest, the best thing about writing these songs is the people that tell me they relate to every word, or better still, take their own meaning from my songs…making it their songs…if one of my songs stays with even one person for the rest of their life as something they go back to and feel something from, then what an absolute privilege this has been.

Our live show is super tight, yet furious…we rehearse as if every show, wether a big venue, festival or a basement show, is the best and last one we will play…we get around the stage, off the stage and into the crowd and try to involve everyone we can….I sing my lungs out, we sweat till we are a mess, we bang our heads in spite of the dreaded bang-over and impending romance with cocodomol, we literally give all we have…but how the hell could we give any less…what would honestly be the point in even turning up?!…we have yet to capture that live performance on a record…and although I’m immensely proud of our records, it’s something we are searching for to finally do our sound justice on our releases, so that we can try to convey the full picture of what we are about, even if the listener is just sat at home by the stereo. I couldn’t honestly tell you how many shows we’ve played….for as long as I can remember over the last 5 years, we’ve toured the UK at least twice (usually three times) for a couple of weeks at a time, every year, we also try to play every weekend and book full weekenders whenever we can, this added to all the midweek shows, festivals, networking events for during the day shows, sessions, acoustic slots….it’s multiple hundreds of times…maybe more than I can remember, but as soon as we play one…it’s on to the next…no time for looking back just now…the next show needs to be the best…that’s not always realistic for obvious reasons…but it’s what we will endeavour to achieve, we want to give people watch a great experience…something they will remember, something that makes them feel something.

I’ve done the usual crowd surfing, climbing and jumping etc…it’s fun, but it’s not revolutionary, I break myself to give my all live but I’ve definitely seen “wilder” things from other bands…the craziest was probably Jona Weinhofen, formerly of Bring Me The Horizon, climb up stage rigging to the very top of the lights above the stage, on a very big festival stage at Download one year…he then hung by just his legs and was rocking out playing his guitar….just thinking of it now gives me that pins and needles feeling in my feet…absolutely crazy stuff…end of the song he just raised himself back up, shimmied along and climbed down…mad man.

For the rest of this year we have four more shows, including an outdoor show in our hometown and a Christmas Eve banger which will be a blast! 2017 will see a couple more singles to tease towards a second album in the summer/second half of the year…we’ll be touring as much as possible, as always, looking to see new places and new faces, make more friends and connect with as many people as we can, to grow as musicians and continue to better ourselves creatively and as people.

A chance to plug someone you’ve toured with, or a mate’s band we’ve not heard of before! I’d love to be supporting The Arctic Monkeys…there are a ton of bands I’d love to support…plenty more that we actually sound like, but hell, The Monkeys play stadiums and that’s gotta be some buzz so we’ll take an imaginary piece of that action! plus, they some like top lads from their interviews, definitely our sense of humour! to open up, and this is not to say I feel the should be opening up for us! but purely because I’d love to tour with them again, would be our buddies from France, Paerish. They are actually touring right now opening up for Silversun Pickups, so perhaps they’ll be too big for us when they get back ha ha! but we’ve been playing shows with those guys once or twice a year for over 4 years now after a chance meeting on our first overseas show in Paris back in 2012…they even came over to Glasgow to record their album (which is awesome!) with the producer who recorded our debut album, Bruce Rintoul, and they stayed over and partied with us for a couple of weeks. we love them and they are going from strength to strength, we’ve talked about touring together very recently so I’m hoping we can make that happen before this Brexit bullshit prevents that from being as straightforward as it should be.