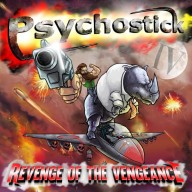 Once in a while you encounter a band that makes you sit and wonder “how come I’ve not heard these guys before?” Also, you may question what’s in the water where they live and if there’s a case for state-provided mental healthcare. Ladies and gentlemen: Psychostick.

Their “read if you like” list consists of: Dethklok, Bloodhound Gang, Tenacious D, Weird Al Yankovic, Primus, Stephen Lynch, Mr. Bungle – and that about sums them up. They’re not quite Lawnmower Deth in terms of heaviness, but they’ve definitely got that edge of lunacy which it takes to melt your brain along with your neck muscles. Formed in 2000 in Phoenix, AZ they’e currently on album number four which came out a little under a year ago.

IV: Revenge of The Vengeance is a collection of 21 tracks of varying length from twenty seconds to five minutes. Topics vary from the awesomeness of beards to the awesomeness of Bruce Campbell by way of a track called – simply – “AWESOME!”. Psychostick, though definitely a metal band at heart, are happy to spread their somewhat mental wings a little which provides for a bit of variety in the songs. “Blue Screen”, for instance, is far lighter – more rock than metal.

There are a few little “filler” tracks which come across like the trailers from Weird Al’s UHF which made their way onto the soundtrack album. It all just adds to the lunacy.

Due to the nature of the songs and lyrics, the aforementioned Lawnmower Deth comparison is inevitable and these guys are the first band I’ve encountered who have really pulled it off. Not just once, but over four albums. The sense of humour is similar, but slightly different. The music is similar, but slightly different. The enjoyment is similar… and from someone who loves Lawnmower Deth as much as I do, that’s high praise indeed. One could argue that “NSFW” is the natural – and significantly longer – successor to The Deth’s “Fuck Off”, for example.

I am gutted that I’ve missed these guys touring the UK, but I have been informed that they will be back – and I’ll be there to see them. If you’re in the US then you can see them touring this month and with Soil in December.

In the meantime, they have a whole ton of videos on YouTube to check out. I’ve struggled to pick just one, but I narrowed it down to a track that an annoying number of my friends had already heard – “Obey The Beard”.

[…] video game nerds (and former Band of the Day) known as Psychostick have posted their new music video “Megaman”, a tribute track to […]