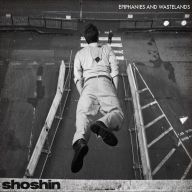 This is the life of hardcore outsiders and fanatical guerrilla street band, Shoshin, formed in Salford by Preston City guitarist, vocalist and songwriter Pete Haley. After Pete moved from Preston to Salford, he met the future members of what would become Shoshin. The match of Joe Stuart and his groove heavy bass with back-beat specialist Abbi Phillips on drums allowed the band to evolve into a power-trio built on unique riffs and bouncing beats. The newly formed 3 piece skipped the rites-of-passage gigs in forsaken venues and devised their own method of reaching a wider audience, performing street shows, guerrilla gigs and their signature technique of ‘crowd-jacking’ where they ruthlessly exploited crowds assembled for other events.

During 2011, Shoshin were more devoted than ever to get their music out directly to people, by the end of the year they had performed in almost every major city in Holland, Belgium, Germany, France, Hungary, Czech Republic, Austria and the length of the UK.

One major appearance seeing Shoshin propelled into the spotlight was a 7 hour performance in the snow at Eurosonic Noorderslaag in Holland. Whilst not being booked for the festival, the band pitched up to entertain the crowds going in, earning them the unofficial title of ‘most successful band at the festival’ by Dutch press.

After being found by chance at a street show in Brussels, Shoshin were tracked down by a NYC label, Purple Bees Records in 2012 and invited to record an album and tour New York State. Their debut album “Deep Sleprivation” was recorded with producer Joel Hamilton at Studio G in Brooklyn and the album took just 12 days to track and mix. Whilst Purple Bees managed to get the album released on iTunes, the promised PR support never materialised. Undeterred, the band returned home and subsequently sold 20,000 copies of the album on the streets around Europe.

To put that into perspective, other albums were seeing 2012 UK album chart entries by selling just 6,000 units, Adele’s album ‘21’ held the #4 spot with just 13,000 sales. Shoshin are proving that in an industry where people talk about decline, if you are determined to get heard, it can happen.

Skip forward to late 2014 and Abbi is succeeded on drums by Sophie Labrey to continue to bringing the beat to the street.

And it was again playing on the street, this time at The Great Escape Festival in Brighton that the band came to the attention of Jaba Music Management and international concert promoter FKP Scorpio. With a new deal signed, fresh material fully developed on the streets, the new album has been recorded with their first-choice producer James Kenosha (Pulled Apart By Horses, Dinosaur Pile-Up and Grammatics) at his studio in the defiantly non-hip environs of Bridlington East Yorkshire and then mixed by Chris Sheldon (Don Broco, The Answer, Heaven’s Basement).

New album, Epiphanies and Wastelands, is out on May 25th through 7Hz Productions