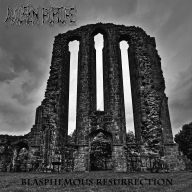 [avatar user=”Mosh” size=”50″ align=”left” /]Back in old Blighty today with Avulsion Rupture, a product of Nottinghamshire. As dark as Sherwood Forest at midnight and as heavy as Little John after a celebratory feast, this black/death band have a lot to offer.

I’m working on the evidence of their Blasphemous Resurrection EP, though the band are currently working on some new material for a full album which should be out early this year. Actually, let me clarify “the band”. Avulsion Rupture is another one-man effort, this time the work of Paul Bobrucki (with a little technical help from Eric Wilson).

Avulsion Rupture used to be a “proper” band, but only released on EP a decade or so ago before splitting up. Paul’s resurrected the name and created this EP in a very short space of time. As such, the production isn’t great, but – as with all the home-grown, low-budget stuff – I’m more than prepared to cut some slack around this.

Drums are, I gather, handled by a little black box so they’re a tad clinical but do the job of keeping rhythm and hammering out the blast beats when required. Nothing that a fleshy being couldn’t handle more naturally (the fastest segments in “Nebulae” in particular sound very electronic) should the band expand once again. The overall sound is very high on the treble, but lovely and evil sounding. Heavily distorted guitars shred out simple but effective riffs overlaid with guttural, almost gurgling lyrics.

The five songs don’t run for very long, most being in the 2-minute-plus category, but they do their job. Evil, twisted and enough to raise the hairs on your grandmother’s neck, they show a lot of promise.

Blasphemous Resurrection is a genuine underground production. It’s rough around the edges but filled with ideas that I hope are fulfilled by the forthcoming Àglæccræft album.