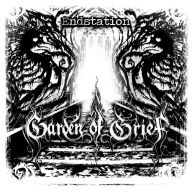 I begin this feature with an apology – I was notified about Garden of Grief at the start of September and part of the information was detailing their IndieGoGo campaign which was raising funds to have the new album released in special packaging as well as digitally. Well, the campaign finished on September 29th, so I missed being able to plug it. Sorry!

So who are Garden of Grief anyway? Well, technically it’s “who is Garden of Grief?”, as it’s another one-man band. Boronian Sturmfels is that man, and he’s guilty for the black metal unleashed on Endstation and four previous albums. Hailing from Austria, he’s been writing and releasing solo projects since 2008.

Initially, he’d written an album-worth of material with the plan of getting in a bunch of session musicians to do all the tricky stuff. But, for some reason, he decided that he’d prefer to run the whole show himself. Unfortunately, the music he’d written was too difficult for him to play, so new songs were drafted for the first album! Of Shattered Dreams and Nostalgic Melancholy came out in September 2009 as a limited release of 200 copies.

GoG’s style changed slightly as releases progressed, including the addition of an ambient tone to some songs. Finally, with the fourth release – Denied Sanctuary X – Garden of Grief recorded and released those original songs. Patience and hard work paid off!

November 2014 should see the release of the fifth slab, entitled Endstation. It’s a mixture of tracks, all suitably melancholy and miserable, with a variety or styles and approaches. There are tracks which are pretty much acoustic. Tracks which are instrumental. Short tracks. Long tracks.

Garden of Grief very much seems like a personal project, one where Boronian is free to experiment and play creatively to his heart’s content and then release the results. With five albums in fewer years, and the success of the recent IndieGoGo campaign, he’s obviously doing something right!