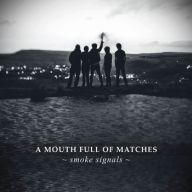 I was first introduced to A Mouth Full of Matches (AMFOM) about a month ago, and as ever it’s taken me a while to getting round to rattling off a few words about them!

Formed in July 2012, they released their first EP (Tasting Fire) in 2013. Reviews were very positive and they made it in the last 15 for a chance to play at Download earlier this year courtesy of a competition run by Red Bull.

Most recently – September 8th, in fact – they released EP number 2, entitled Smoke Signals. Produced by Matt Hyde (BFMV, Slipknot, Machine Head…), it’s unsurprisingly of a high quality production-wise, and thankfully it has the songwriting and musicianship behind it to make the most of his skills.

The four tracks are all worth listening to, managing to be “easy listening” enough to put on in the background when you’re doing something else while also standing up to closer scrutiny when they’re the focus of your musical attention. The subject matter of the songs are quite personal and expressive of the band’s thoughts and emotions. From the joy a special person can bring you to passion and rebellion, AMFOM pick up on the internal voice of their generation (and some of the more youthful eldsters!) very well indeed.

As I said, the EP is already available and you can grab it from their bandcamp page as a “pay what you want” package. Be generous!

[…] featured A Mouth Full of Matches as Band of the Day at the start of this month. They got back in touch to give me a run-through of the tracks on their latest EP, Smoke Signals. […]

Band of the Day: The Prophets | The Moshville Times

[…] a launch party the night before at The Arches in their hometown. Main support on that date is from another previous Band of the Day, A Mouth Full of Matches – so it’s definitely going to be worth the trip […]

[…] for their young age, followed fellow Coventry band The Ellipsis, and finally Manchester-based former Band of the Day A Mouth Full Of Matches. I highly recommend checking out all of these bands if you find them in […]